Canadian studio Naturehumaine has extended a house in Montreal to create a family living area and an elevated master bedroom, which are all encased in a large grey frame that offers privacy from neighbours.

The local architecture firm designed the extension as part of its transformation of the two-storey De La Roche residence in the city's Rosemont–La Petite-Patrie borough.

At the front, the house features a brick wall that had to remain due to planning regulations, but Naturehumaine was offered creative freedom when building the addition at the rear.

Of the two residences either side of the house, one extends further than the other, so the architects slanted the end of the extension to bridge the two. The arrangement offers privacy to a new outdoor deck for dining.

"An angular frame like structure connects both immediate neighbours as a result of their differences in the protrusions of their constructions," said the studio, who named the project De La Roche.

The extension is built in two parts. One forms the "frame-like structure" partially covering the deck, while the other forms a smaller bedroom volume slotted underneath. It is raised above a smaller glazed porch to the garden.

A recessed wall behind is fitted with a set sliding glass doors that lead from the ground-floor living area to outside. Another window brings light into the dressing room of the master bedroom suite on the first floor.

These different elements are differentiated by a three-part material palette, which the architects intend to "create an effect of depth on the garden facade".

Dark grey fibre-cement boards clad the outer frame, while the panels selected to cover the walls of the recessed bedroom volume are paler. Steel blinds shading the window of the porch below match this tone.

Elements of the furthest walls – comprising steel shutters on the first level and frames of the sliding glass doors on the ground floor – are copper-coloured, which brings out the reddish hues in the surrounding brickwork.

As part of the project, the architects also completely reconfigured and renovated the interior of the house.

On the ground floor, the kitchen, dining and living room occupy an open-plan space overlooking the garden. The hallway and a second living room are placed in separate rooms towards the front.

Inside, the team choses a simple material palette – mainly monochrome with touches of wood.

The floors are covered in large, pale tiles and the walls are all painted white.

A marble-like counter in the kitchen forms the central island and white shelving runs a long the back wall. This is punctured by a black block that hosts the oven and hob.

A black fireplace is built into the wall of the facing lounge, while black pendant lights hang above the wooden dining table.

Leading from the living area to the first floor, the staircase is placed underneath a roof light and forms the centrepiece of the home.

It has three steps clad in marble that attach to a plywood volume, and extends at both ends to form storage in the lounge. On the other side it punctures through an opening to create a desk for studying.

The second part of the staircase is built on top of this wooden block, and features curving white perforated steel balustrades and white birch steps.

A pair of identical bedrooms for two children accompany the master bedroom on the first floor. The family bathroom between the two continues the monochrome palette, with white walls and black tiles in the shower.

Founded by Stéphane Rasselet and Marc-André, Naturehumaine has completed several renovations in Montreal, recently adding a three-storey skylight to a row house.

Other projects by the studio include a zinc extension to a historic brick dwelling, expanding an existing property by building an additional floor, and fitting a bright yellow stairwell into a historic home. 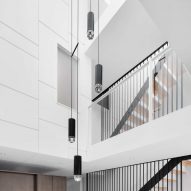