A gabled titanium roof and wooden walls form this white house that architecture studio Naturehumaine has perched on a wooded site in Québec, Canada.

Naturehumaine designed the Poisson Blanc cabin in Laurentides, Québec with the striking shape to take cues from the rocky, inclined site. Its name references the nearby lake and park called Poisson Blanc, which translates as white fish.

"The concept of this chalet results from the rugged topography of its site, a sloping terrain on which the project is anchored in the bedrock, revealing an angular and monolithic architecture," said Naturehumaine.

The wooden cladding is painted white to match the titanium coating on the roof, shown covered in snow these photographs. Each wall is also fronted by a set of windows outlined with aluminium framing.

Measuring 1200 square feet (112 square metres), the house has a compact floor plan and two levels. "Its shape and its most minimalist expression allows for optimal compactness and a reduced footprint on its site," the studio added.

On the south facade, one large window provides generous views of the surrounding landscape and lake, while another wraps around one of the house's four corners.

A pair of long, narrow windows on the opposite face match the glass front door on the tiny dwelling. 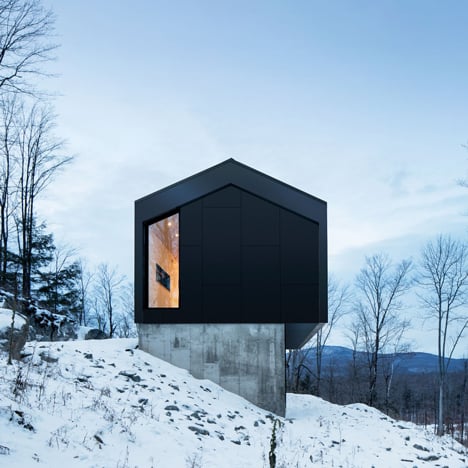 Two wooden footbridges attach to the house, one of which leads to the only entrance, and are detailed with slender metal roping used as railings.

The living area, kitchen and master bedroom are located on the cabin's ground floor. The second level is burrowed into the hillside and houses storage, a playroom and another bedroom.

Inside, exposed joists are painted white and span across the ceiling of the interiors. The vaulted construction is intended as a nod to the name of the nearby park and lake with a formation that takes cues from the ribbed skeleton of fish.

"Visible from the living spaces, the criss-crossing structure of the roof echoes the name of the lake by recalling the skeleton of a fish, as does its immaculate colour," the studio said.

In the open plan living area, a built-in storage unit covers one of the walls to create ample storage for books and firewood. The shelf is constructed from maple veneer panels that continue into the kitchen to form cabinets.

Additional furnishings in the kitchen include a pair of shelves fixed to the wall above the sink, a simple dining table and set of chairs and two geometric pendant light fixtures.

In the half-bathroom, the floor and walls are covered in grey tiles. A slender window with translucent glass occupies one of the walls in the small space and a built-in wood vanity attaches to another.

Naturehumaine was founded in 2004 by Stéphane Rasselet and Marc-André Plasse and has completed a number projects in the Québec region. Examples include a holiday home that comprises two blackened wood cabins and a steel-clad volume raised on a concrete plinth.

Photography is by Raphaël Thibodeau.