A white box bursts through the roof of this old chapel in Limburg, Belgium, to form the new studio for architecture office Klaarchitectuur.

Klaarchitectuur added rectilinear volumes both inside and outside the 17th century building, as part of a major renovation that involved completely replacing the roof.

Now known as the The Waterdog, it primarily functions as a workspace for the architecture practice, but is also opened to the public for regular community events.

The property was originally built as a monument, and was only converted into a chapel in 1872. Despite being a heritage-listed building, the it fell into disrepair, and was no longer fit for purpose.

Klaarchitectuur's renovation celebrates the building's heritage. The studio made as few structural changes as possible, and left the majority of the internal surfaces unchanged.

"I fell in love with the charm of the old chapel several years ago," studio leader Gregory Nijs told Dezeen, "so it was vital the historical character of the building remained intact."

"The decision was made to preserve the old building in its full glory, in its entirety, despite it being heavily affected by the ravages of time."

Nijs and his team began by erecting a stand-alone structure within the centre of the chapel, a suitable distance away from the building's patchy, blush-toned walls.

Four irregularly stacked boxes form the main body of the office, each of them occupied by different departments. The highest of these extends out through the chapel's roof. This was easy to achieve – as the roof was being replaced anyway.

In the other three boxes, monochrome meeting rooms and casual work areas are connected by chunky black staircases. On the upper levels, occupants are given a close-up view of the chapel's exposed wooden roof beams.

"By stacking the offices, the necessary space was freed up to create an engaging and multifunctional space that can be used for a broad spectrum of activities," Nijs explained.

In the other areas of the chapel, oak parquet was used to create a flooring with a touch of warmth, while spherical pendants lights were suspended from the ceiling.

The architects also added metallic decor details, in reference to Christian iconography. A gold-toned breakfast bar in the kitchen, which sits underneath the chapel's faded blue dome, is specifically meant to resemble a traditional altar. 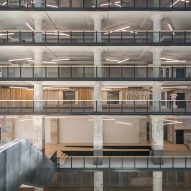 Photography is by Toon Grobet, apart from where otherwise indicated.