Next up in our review of 2017, architecture reporter India Block highlights 10 of the most important museums and galleries that opened this year, including Heatherwick Studio's converted grain silo, the colossal Louvre Abu Dhabi and a Peru museum that replaces another lost in an earthquake.

In 2007 an earthquake destroyed the Museo de Sitio C Tello in Peru. Ten years later, Lima-based Sandra Barclay and Jean Pierre Crousse have rebuilt the low-lying geometric volumes in a new palette of red concrete to blend with the desert surrounds. The museum stands on the edge of the Paracas National Reserve and exhibits artefacts found by 1920s explorer Julio C Tello, who discovered the 2,000 year old necropolis nearby.

The United Arab Emirates got its very own Louvre this year in the form of Jean Nouvel's geometric dome-covered gallery.

Eight years in the making, the Abu Dhabi Louvre is located on the man-made Saadiyat Island. Its domed roof comprises 8,000 interlocking stars, which pay homage to traditional Islamic architecture, while also flecking the white blocks and walkways below with dappled light.

BIG caused a stir with its new exhibition spaces for the Tirpitz Bunker in Blåvand, Denmark – as the project resembles a swastika from above.

The bunker was built by Nazi forces during the second world war, but now hosts a museum. BIG carved four channels through the adjacent dune, which intersect to form a light-filled courtyard in between the dark, war-focused exhibitions in the sunken galleries.

This year saw the opening of the first fashion-dedicated museum in Africa – a 4,000-square-metre building in Marrakesh, created by Studio KO to celebrate the designer Yves Saint Laurent.

It features a brickwork facade that mimics the warp and weft of woven fabric, while the the velvety white walls of the entrance hall suggests the lining of a couture jacket.

This year saw the end of Thomas Heatherwick's dream for London's Garden Bridge, but in South Africa Heatherwick Studio's Zeitz Museum of Contemporary Art Africa was a smash hit.

Also known as the Zeitz MOCAA, the art museum was created by hollowing out a 1920s grain silo on Cape Town's Waterfront. Vast sections of its tubular insides were carved out to make 80 gallery spaces, which are home to the world's most important African art collection.

Read more about the Zeitz MOCAA ›

Clad in local limestone, the faceted form of the Palestinian Museum and its terraced gardens was inspired by the rural landscape of the West Bank.

Irish fimr Heneghan Peng won a competition to design the museum dedicated to Palestinian culture back in 2010. Set into a hilltop, exterior stone slabs extend to form an open air amphitheatre.

Read more about the Palestinian Museum ›

A cliffside extension to the Tate St Ives in Cornwall, southwest England, includes an underground gallery space and a rooftop garden.

London-based Jamie Fobert Architects designed the ceramic-clad art gallery extension to mirror the colours of the sea. The sunken structure doesn't obstruct views sea from the cliff, but the concrete gallery spaces inside are bathed in warm light from south-facing windows.

The the original Lascaux Caves have been closed to public since 1948, but the new museum displays meticulous replicas of the cave paintings in a chilly underground space. The jagged roofline runs along the side of a hill and the layered concrete walls emulate limestone strata.

Although it was technically finished in 2015, the Rivesaltes Memorial Museum in Perpignan, France, won a lot of attention this year by being one of five finalists for the 2017 Mies van der Rohe Award 2017.

Architect Rudy Ricciotti sunk the concrete monolith into the red earth of the site of a French military and internment camp where gypsies, Jews and Catalan refugees were imprisoned during the second world war. There are no internal windows, only openings cut into the gently inclined roof.

The V&A museum got a new entrance and exhibition hall this year, courtesy of Amanda Levete's firm AL_A.

The £54.5 million scheme represents the largest expansion of the museum in over 100 years. A new courtyard paved with 11,000 handmade porcelain tiles arranged in a pattern covers the new 1,100-square-metre column-free Sainsbury Gallery below. 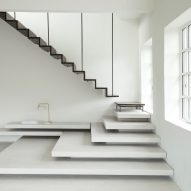