Only women are invited to become members of this co-working club in New York, which has opened in Soho to join a location in the Flatiron district.

The Wing provides women with a mix of open-plan and private workspaces, as well as programmed events like talks and film screenings.

It is intended to be a supportive community that mirrors that of the women's club movement in the 19th and 20th century, which saw nearly 600 groups established in New York.

The club was founded last year, and launched its first space in the Flatiron neighbourhood – on a stretch designated as the Ladies' Mile Historic District – while the second location opened in Soho last month.

For this new hub, just off Mercer Street, The Wing gave interior designer Chiara De Rege just six months to overhaul a space in an old warehouse to provide for its quickly growing membership.

De Rege aimed to continue the aesthetic already developed at the Flatiron location – including a pale "Wing pink", decorative wall coverings, and a mix of vintage and contemporary furnishings. She also wanted to make the most of the loft's original features like windows, skylights and high ceilings.

The space was stripped back to reveal the existing wooden floorboards and ceiling structure, and brickwork walls, which are all painted white.

In the "living-room style" reception, De Rege included a mix of chairs and sofas to create two lounge set-ups in the centre. Pale green benches face small, custom-made terrazzo tables for women to work on their laptops.

Artwork, which hangs from a simple rod on the back wall, is made by female artists and will be rotated.

"The interior of the area is more lounge like and living room style for informal conversation and meetings," De Rege told Dezeen. "We mixed vintage lighting and rugs with custom and contemporary furniture."

A curved desk below a sign for The Wing fronts the entrance, alongside an area for club merchandise. Access to the other areas is provided through archways, which are painted in different shades of pink.

The main space, known as the great room, is intended for a wide range of uses. Like the reception, it features an eclectic mix of furnishings, from plush red chairs and velvety green sofas, to more austere white seats with black stripes.

"The rest of the great room is a mix of surface tops and lounge like seating for members to either carve personal space out for work or just hang out and chill on the more relaxed seating areas," said De Rege.

"This entire room is extremely flexible as it transforms day into night as an event space for programming."

Part of the open-plan room is also lined with a birch wood shelf filled with books arranged according to colour. A long reading desk is placed beneath a skylight in this portion of the room, while other chairs are arranged in fours around existing columns.

The cafe adjoins the grand room. De Rege chose brass sconces to reflect the natural light from the large rooflight. Other details include birch panels that line the walls, and terrazzo tables and pink and green chairs that add a "fun pop".

Similarly playful elements are used in beauty room, conference rooms and changing rooms, which feature wallpaper decorated with illustrations. The showers in the club's bathrooms are lined in plaid tiles.

The Wing plans to continue its expansion with two more locations in the US: Brooklyn and Washington DC.

With membership based on gender, it separates itself from competing co-working spaces that are popping up in cities across the world, including a host in New York.

Well-known company WeWork has established a growing number across the city, while others include a warehouse at Brooklyn's Navy Yard and the A/D/O creative space backed by MINI. 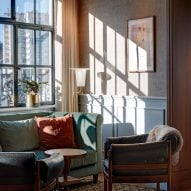