Minimalism and the De Stijl architectural movement are among the inspirations behind design brand Loehr's new furniture collection, which was launched at a Berlin house designed by Oscar Niemeyer in 1957.

The German brand, which was founded in 2012 by three brothers David, Leon and Julian Löhr, has added to its existing Germany-made collection with the launch of a shelf, bench, two-seater sofa and bistro table.

In addition to the new pieces, Loehr has also introduced a selection of new colours and materials to existing products.

The pieces were launched last month, at a house that Brazilian architect Oscar Niemeyer designed in 1957 for the Internationale Bauausstellung Interbau.

The eight-storey building, which houses 78 apartments and is not ordinarily open to the public, is elevated by great V-shaped pillars at ground level.

It boasts six staircases and features a triangular lift tower that provides access to the fifth and eighth floors.

A common space on the building's fifth floor, which was originally designed as a space for informal meetings between residents, was used to showcase the new collection.

"Loehr furniture is inspired by architecture, comes in understated shapes and is not destined for any specific areas," explained the brothers, who moved the brand from Hamburg to Berlin in 2015. "Quite the contrary, the furniture suggests a kind of functional ambivalence that fluctuates between the private and the public."

"As a result, the furniture is ideal for offices or homes," they added. "It's especially interesting for threshold and transitional spaces, receptions, semi-public areas, lounges and bars."

Already available as a lounge chair, the Euclides line has been extended to include a new two-seater sofa. Upholstered in Kvadrat fabric, the design is based on the principle of balanced minimalism and features an upholstered seat slotted within a slender tubular steel frame.

Designed as a continuation of the Euclides line, the Plato bench features a simple cushioned seat seemingly balanced at the tip of a minimal A-shaped tubular steel frame available in mirror-polished stainless steel or powder-coated steel.

A varied combination of seating groups can be created when it is teamed up with Euclides easy chairs or two-seaters.

The wall-hung Newton shelf and display is made from two pieces of sheet steel folded into a load-bearing triangular structure. Available in two lengths, the powder-coated shelf's open profile allows the shelves to be placed seamlessly in a row.

Loehr's existing Faber table is joined by a high table, stool and barstool, available in industrial green, sky blue and zinc yellow in addition to the existing color range.

Made of solid oak, the series' distinctive base frame is inspired by the wooden structure of northern-European half-timbered architecture.

Already available in a square version, the brand has added a rectangular side table to its Tangram range and also extended the colour selection to include industrial green, sky blue and zinc yellow. The table's steel frame is offered in a powder-coated or mirror-polished finish.

Based on the same frame as Tangram, the Umbra side table, which features a larger, protruding square or round table top, is now also available in the three new colours: industrial green, sky blue and zinc yellow.

A tribute to the principles of the De Stijl architectural movement, the industrial Neo table features a clear, linear frame that is now supplied with a snow white table top as well as black linoleum or oak veneer.

A tribute to the principles of the De Stijl architectural movement, which saw artists and architects create abstract work based on a strict geometry of horizontals and verticals, and bold colours, the industrial Neo table features a clear, linear frame that is now supplied with a snow white table top as well as black linoleum or oak veneer. 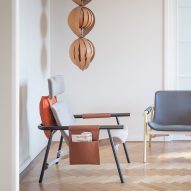