The American Institute of Architects has announced James Stewart Polshek as the recipient of its highest accolade, to be awarded next year.

Polshek founded Polshek Partnership, a firm that transitioned to become Ennead Architects following his retirement in 2005.

He counts the six-storey-high glass Rose Center for Earth and Space at New York's American Museum of Natural History, and the Clinton Presidential Center in Arkansas among his portfolio of work.

The American architect is known for his socially conscious works – his restoration and renovation of New York's Carnegie Hall in 1987 was "coupled with a heavy dose of advocacy" to protect landmark buildings.

He also designed the glass and terracotta National Museum of American Jewish History in Philadelphia and the headquarters of the Newseum, an institution dedicated to free speech, in Washington DC.

"Polshek has fostered an environment wherein design excellence, effective collaboration and rigorous research work in concert to create enduring architecture," said a statement from the American Institute of Architects (AIA).

"Polshek's sensitivity as an architect and his willingness to give credit to others — whether they be his clients, staff or collaborators — have helped restore the promise that architecture can be an uplifting force in the world.

"Everywhere that he has worked, and throughout his eloquent writings, he has raised the level of discussion, while pursuing an unambiguous goal of architecture as a healing art."

Born in Akron, Ohio, in 1930, Polshek gained his masters in architecture at Yale University, graduating in 1955. He then spent a stint working for the renowned Chinese-American architect IM Pei, before establishing his eponymous practice in 1963. It was renamed Ennead Architects in 2010, following his retirement in 2005.

The firm predominantly builds for not-for-profit cultural, scientific and government institutions, with recent projects including a farm in New York and a law school in Phoenix.

"Jim's commitment to civic space and to practicing architecture with moral imperative will forever remain central to our practice," the partners told Dezeen. "His lasting accomplishments in the field continue to inspire and activate us."

Polshek's other accomplishments include a stint as dean of Columbia University's Graduate School of Architecture, Planning and Preservation – from 1972 to 1987 – for which he is credited with establishing the school as the respected institution it is today.

"At the time, Columbia played a central role in the debate over style and meaning during a period in which architecture was being fundamentally questioned," said the AIA.

"His collaborative spirit led to a complete revision of the school's curriculum and direction that, in turn, reversed its decline and attracted world-class faculty."

Polshek will receive the AIA's Gold Medal in 2018 at the institute's conference in New York next year, becoming the 74th recipient of the prize awarded annually to architects in recognition of their legacy to the field. 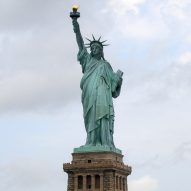 Project photography is by JeffGoldberg, unless stated otherwise. James Stewart Polshek's portrait is by Aislinn Weidele.

More from the AIA