Researchers from the National University of Singapore have created an underwater robot designed to move and look like a manta ray, better disguising the machine among its aquatic surroundings.

The MantaDroid is designed to be used for underwater surveillance and marine biodiversity studies. It proposes an inconspicuous alternative to conventional underwater vehicles currently used.

Measuring 35 centimetres in length, 63 centimetres in width and weighing only 0.7 kilograms, the aquatic robot is able to swim at a speed of 0.7 metres-per-second for up to 10 hours.

"Unlike most underwater species, manta rays possess a unique propulsion mechanism that enables them to cruise through turbulent seas by flapping their pectoral fins effortlessly."

"These distinctive features sparked great interest in understanding the science behind the mechanism, and how to incorporate similar mechanisms into autonomous underwater vehicles (AUVs)."

The MantaDroid is driven by its flexible pectoral fins, made from polyvinyl chloride (PVC) sheets. These are used instead of the propeller-based thrusters found in ordinary AUVs, and have the potential to operate for a longer range.

These fins are attached to a flat and wide body, completing the imitation of a real manta ray. The body accommodates a range of sensors and can be utilised for different purposes, such as studying marine biodiversity, measuring hydrographic data and performing search operations.

"Unlike other flapping-based underwater robots that replicate manta ray's flapping kinematics by using multiple motors to achieve active actuations throughout the fins, MantaDroid is powered by only one electric motor on each fin," said Chew Chee Meng.

"We then let the passive flexibility of the fins interact naturally with the fluid dynamics of the water to propel the subsequent motions," he added.

The manta ray robot was designed and built over the course of two years, as the team carried out an in-depth study of fluid dynamics, and undertook multiple experiments – which included the testing of 40 different fin designs.

The NUS team will be testing the MantaDroid in a sea environment next, to assess its swimming performance and capability in different water depths and unpredictable underwater currents.

The team is also working to incorporate more modes of movement in the robot's fin mechanism.

They are becoming increasingly used in architecture, and not only as a tool to photograph and film buildings. Mark Dytham of Klein Dytham Architecture recently claimed that drones will transform the way buildings are designed, as they start to replace road traffic.

The transport industry is also investigating ways to use drones – Land Rover recently launched a vehicle that uses a drone for search and rescue, while BMW has revealed a concept car that could receive drone deliveries on the move. 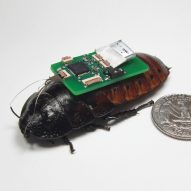