MIT's Self-Assembly Lab has demonstrated its rapid liquid printing process at this year's Design Miami fair, using it to create products in front of visitors.

"The space serves as a manufacturing facility in which a robot instantly prints tote bags and art objects inside a glass tank of translucent gel," said the team. "This exhibit is the first public demonstration of MIT's rapid liquid printing technology."

Unveiled earlier this year, the new method of 3D printing involves extruding material from a computer-controlled nozzle into the gel.

The robotic arm moves quickly around the tank, depositing a rubbery filament that remains suspended in the gel. The filament bonds to itself but not its surroundings, so once set, the drawn object can be removed in one piece.

At Design Miami, visitors could see inside the transparent tank during the production process, then watch as the items were removed, cleaned up, and put on display.

The entire process took only a few minutes per-design, and all of the objects were available to purchase straight away.

The Self-Assembly Lab, co-directed by Skylar Tibbits and based at the Massachusetts Institute of Technology, says that the process can also be used to print objects like furniture at a much larger scale – limited only by the size of the tank.

"Traditional 3D printing is restricted by slow speeds, scale constraints, and poor material quality, which makes it unreliable as a mainstream manufacturing process," the team said.

"With rapid liquid printing, manufacturing can be reimagined as an artistic experience unlimited by scale or gravity, asking us to rethink design, production, uniformity, and product life-cycles."

Design Miami took place from 6 to 10 December 2017 in Miami Beach, coinciding with the Art Basel fair and other events that make up the city's annual art week.

Highlights from the design fair included a door carved with cartoon aquatic creatures, a bronze oatmeal bowl, and a spherical room for peace and quiet. 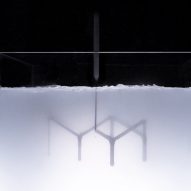