Thin layers of carbon fibre are cut to create the wood-like effects on these sunglasses, by industrial designer Rodrigo Caula.

The pattern is formed by slicing through the thin layers that make up the black material at a very slight angle, exposing darker and lighter stripes.

Caula named the material "carbonwood" for its resemblance to the grain found in sawn timber. "The term 'carbonwood' was coined once I'd designed the material to mimic the structure of vertical grain wood – after being machined by a computer-controlled cutting machine," he said.

To make the glasses, carbon-fibre sheets, or blocks, were formed using an autoclave pressure chamber. The number of layers needed to construct the frame was calculated then translated into computer-aided design (CAD) software, before the form is then sent to be machined.

The composite can be made with up to 500 thin layers, giving it "unprecedented structural characteristics", said Caula. "They're extremely light and robust, but offer a cold touch similar to stone, which can never be achieved with traditional carbon fibre manufacturing methods," the designer added.

The circular style of the frames of Carbon Wood Glasses is a reference to classic eyewear from the late 1800s. The lenses are also polarised, with flexible hinges developed with craftsmen in Switzerland and made of stainless steel.

Caula created the shades during his masters programme in luxury design and craftsmanship at Swiss university ECAL. He now works in automotive material development and sustainable design strategies, and is part of electric car brand Tesla's Color and Material design team, based in Los Angeles.

Carbon fibre is notable for its light weight and durability, and commonly used in the production of automobiles and road bicycles, but the glasses showcase an alternative application for the material. Others include large filigreed shutters at an Apple Store in Dubai, a lightweight, black chair  by Thomas Missé, and an overhanging fibre-spun pavilion in Germany based on the silk hammocks made by moth larvae.

Images are by Rodrigo Caula. 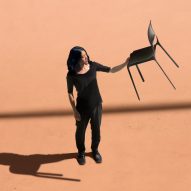 Thomas Missé designs carbon-fibre chair fit for use on Mars