A gabled opening that references the forms of traditional hutong houses marks the entrance to this hotel in Beijing by architecture studio Penda.

The XinXian Inn Hotel is located in the Dongcheng District of central Beijing, where there are many traditional courtyard houses that are now hidden behind modern commercial developments.

Penda, which has offices in Beijing and Austria, was approached by a young entrepreneur who had purchased a traditional guesthouse and wanted the studio to develop a proposal for its modernisation.

The client admired the area's historic hutong neighbourhoods and wanted to retain the character of their narrow streets and alleys in the design of the new building.

Working to a tight budget, Penda employed familiar forms and materials found throughout the area to create a low-budget 1,000-square-metre hotel that celebrates the character of the hutongs.

"Throughout Beijing, the rich culture and vivid life-style of the hutong areas are mostly getting replaced by highly profitable and shallow real-estate blocks," claimed the studio, which was founded in 2013 by architects Chris Precht and Dayong Sun.

"With this hotel, we tried to incorporate the atmosphere and history of the hutong areas into a hospitality design."

The existing guesthouse that occupied the site featured two storeys containing small rooms with a limited access to natural light.

The architects introduced a large glazed surface in the shape of a typical hutong residence into the massive brick facade to introduce an iconic feature that distinguishes the hotel within the streetscape.

The material palette of dark brick, wood and glass references the neighbourhood's traditional architecture. The opening also allows daylight to pour into a lounge and lobby on the ground floor, as well as creating a visual connection between the street and the interior.

"Seeing guests chatting and relaxing reflects in a way the traditional image of Beijing," said Precht, "where the streets of a Hutong area were a public space and people would discuss, take a rest, dance or play cards in front of their houses."

The ground floor originally accommodated a reception area that occupied most of the space, with 50 guest rooms positioned on the upper storey.

As there is no elevator in the building, Penda was asked to reconfigure the lower floor to include a suite for guests with accessibility issues. The remaining space contains a reception and a communal space looking onto the street.

A narrow passage leads from the entrance towards the reception desk at the rear, which is positioned beneath a gabled framework that continues the domestic motif from the facade into the building.

"Walking into the hotel, the hallway seems like an alley wending through a neighbourhood of little houses," the studio added. "We placed a lot of plants along the way, so the atmosphere between inside and outside fades and the hotel creates a little hutong by itself."

The functional areas including the reception, lounge and lobby are contained within the wooden shelter. A similar approach is used on the first floor, where Penda reduced the number of guest rooms to create space for public areas.

House-shaped timber structures where guests can meet, socialise or work are interspersed throughout circulation areas, replacing the previous guesthouse's standard corridor with rooms on either side.

"The idea to create gathering spaces, public areas or a neighbourhood atmosphere is a topic throughout the hotel," the architects explained.

The wood used for the communal spaces provides a warm and tactile contrast to the stone walls, which continue the sense of walking along narrow hutong streets throughout the building.

Penda's previous projects in Beijing include a toy shop arranged around a network of columns and arches inspired by the shape of a dandelion, and an auditorium for an art museum set inside a wooden box featuring curved cutaways and mirrored surfaces. 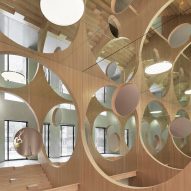