The building in Montevideo has an entirely white front facade and large windows, contrasting with the surrounding residential and industrial buildings.

It was constructed for import business Prinzi SA, which wanted to relocate its offices to be close to its distribution centre in the La Comercial neighbourhood.

The project also involved transforming the existing warehouses into a larger logistics hub, with centralised operations. "The proposal focuses on articulating the various warehouses and sheds to become the operational centre of the physical plant's 2,500 square metres," said Cotignola Staricco Tobler Arquitectos.

The new structure nestles among various warehouses and sheds, and serves as a link between the firm's existing buildings.

"The design for the new offices partly reuses these constructions, namely the areas that used to house the locker rooms and dining spaces of the old industrial centre," said the architecture studio.

The two-storey office measures 500 square metres, with workspaces on both floors, and an entrance foyer wrapped in timber. On the ground floor is a sitting room, kitchen and small desk space, along with existing toilets and a utility staircase the back of the building.

"The existing ducts running along the facade – which originally sustained the service areas of the factory – allow to conceive a 'deep' facade, thus tending to one of the client's main concerns: to separate and give intimacy to the offices without surrendering light-filled workspaces," the firm said.

A main stairwell in front of a double-height window distinguishes the bright interiors, and is made of hundreds of thin, white beams that run up through the second level.

On the first storey is a large meeting room that overlooks an outdoor grotto, bringing in additional natural light. Leaves from a nearby tree fall into the courtyard through a slatted roof.

A collection of workspaces and desks are upstairs, along with a second, smaller outdoor area towards the rear.

The entire space has white walls to match the exterior, with wood floors and plants throughout. Tables and cabinets also feature timber, to help unify the space and play upon the use of nature indoors.

Founded in 2013, Cotignola Staricco Tobler is run by Andrés Cotignola, Marcelo Staricco and Carolina Tobler and based in Montevideo. The firm collaborated with structural engineer Alberto Catañy for the build.

Photography is by Marcos Guiponi. 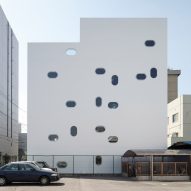