Oil rigs, Maunsell forts and a wading bird provided the inspiration for this artist's retreat in a salt marsh on England's east coast, which becomes inaccessible when the tide comes in.

The seaside studio space was developed by British architect Lisa Shell for artist Marcus Taylor, who wanted a peaceful place that he could retreat to and concentrate on his work.

Taylor had purchased a dilapidated timber-framed house from the 1920s in the hamlet of Lee over Sands, which is situated within Essex Wildlife Trust's Colne Point Nature Reserve.

The site's location on the exposed side of the sea wall means it is regularly inundated, so the old house had to be removed and replaced with an alternative that is suited to this unique location.

"The coastal site is an extreme environment in which to build," said Shell, "but also one that is delicate and sensitive: these constraints demanded innovation and experimentation."

"The changing climate – annual, seasonal, monthly and daily cycles, alongside long-term climate predictions – had a crucial influence on the design."

Rather than proposing a robust, flood-proof structure, the architect developed a design that raises the building out of reach of the rising tide.

Three galvanised-steel legs finished in a resinous paint that will withstand the salty air elevate the structure and allow the sea to wash underneath. A staircase with symmetrical flights docks to the side of the cabin.

The elevations are clad in untreated oak boards and cork panels that form a skin around the cross-laminated timber frame and offer protection from the salty winds.

The stairs ascend to a decked terrace from which the entrance leads into a small hall providing access to a bedroom and wet room.

A sliding door separates the hall from a living space featuring a kitchen and wood-burning stove. The building's orientation and internal arrangement are determined by the path of the sun and the available views.

The southern elevation incorporates a large window that looks out towards a shingle bank and the sea beyond, while other openings are carefully positioned to avoid overlooking neighbouring properties so the building's sense of isolation is enhanced.

Significant features that can be seen from the studio provided key sources of inspiration. These include wind turbines and one of the armed towers built in the Thames during the second world war.

The colour of the building's painted pillars also reference the red legs of the redshank – a wading bird that can be found in the salt marsh and from which the project takes its name.

The delicate seaside ecosystem necessitated a design and construction method that minimises the house's impact on the environment. Cross-laminated timber panels were prefabricated to reduce time spent on site and provide a natural finish that is left exposed internally.

"The construction period was limited to summer months to avoid impact on the environment whose qualities are relied upon by overwintering birds," Shell added.

"By removing the asbestos-polluted hard-standing that covered much of the plot and lifting the building aloft, the ground level is donated back to the marsh."

The cork sheets are applied to every surface of the building's exterior, including the roof and underside. The material's mottled texture echoes the plumage of the redshank, as well as the tones of the surrounding landscape.

"Redshank demonstrates how to survive flood risk in an era of storms and tidal surges, whilst giving proper consideration to the natural environment in which it sits," the architect concluded.

"Its idiosyncratic design has also generated an extraordinary, comfortable retreat without offending the locals."

Redshank featured on the longlist for the 2017 RIBA House of the Year Award, which went to a house in Kent with chimney-like roofs inspired by traditional oast towers. 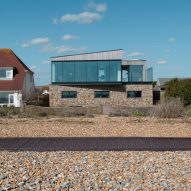