This office in Indonesia created by Studio Air Putih for its own team of architects and interior designers comprises a series of red-brick volumes arranged around a courtyard planted with trees.

Studio Air Putih is based in the city of South Tangerang in Banten province, which is part of the Greater Jakarta metropolitan area.

The office founded by Denny Gondo and Joke Roos was previously based in a residential area and was relocated to a suburb defined by its mixture of building typologies.

The main source of inspiration for the design of the office came from the surrounding context, where the majority of buildings are spread out and moderate in size.

Studio Air Putih therefore arranged the office as a cluster of volumes with varying proportions that are positioned around an open courtyard containing several trees.

The open-air space at the centre of the building provides a private area where employees work in the shade of the trees, or at a large table beneath a cantilevered canopy.

The structures are clad entirely in red brick, with exposed concrete used for some of the functional elements. The uniform surfaces create a sense of consistency that unites the overall scheme.

"The use of bricks as the main material of the building gives various good characteristics," said the studio, pointing to its properties as a locally available resource that also requires little maintenance.

"[Brick] gives a good impression towards its emphasis and blending in [with the surroundings] at the same time."

At the street entrance, a pre-weathered steel volume flanked by retractable shutters complements the tone of the brick and forms a robust surface separating the building from its surroundings.

A paved surface leads towards a set of concrete steps and a canopy that marks the entrance to the office spaces.

The studio believes that productivity is increased by minimising external views, so the main studios are mostly illuminated from above and feature windows that look onto brick walls.

The exception is a lounge and meeting area lined with large windows and doors that open onto a concrete platform overlooking the courtyard.

Employees in need of a change of scenery during the day are encouraged to move around or use the outdoor space as an alternative workplace.

The courtyard is flanked on one side by a screen formed of brick pillars with varying widths that creates a striking pattern of light and shadow when illuminated from below at night.

A palette of simple materials used in their raw state is applied throughout the building to complement the exposed masonry and steel structure.

Natural light reaches the interior through carefully positioned windows and skylights, such as the one above a staircase with metal treads that cantilever from a brick wall.

In some of the more important areas, slabs of veined marble are applied to walls and floors to introduce a more natural and luxurious surface detail.

Photography is by Mario Wibowo. 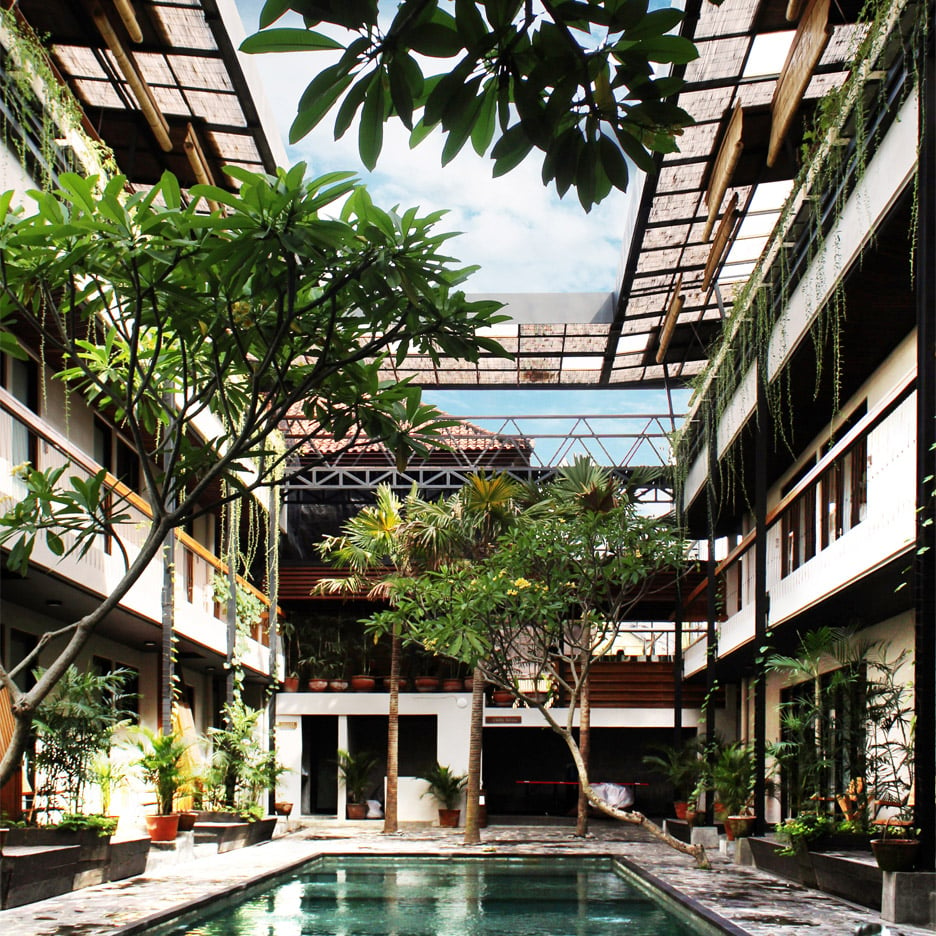