The controversy surrounding President Donald Trump's wall between the US and Mexico continues, as updated plans bring the predicted cost to $33 billion, while a petition has been launched to designate the eight construction prototypes as a national monument.

Updates to the US-Mexico border wall proposal include a 316-mile-long extension to the existing 654-mile barrier, as well as replacing and building up to 407 miles of secondary wall at an estimated cost of $18 billion (£13.3 billion).

Trump's costing request to Congress is outlined in a previsionary plan, which the Customs and Border Protection agency at the Department of Homeland Security created for the group of US senators. 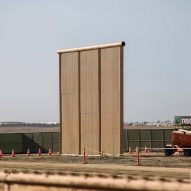 The document has not yet been made public but was obtained by The Wall Street Journal last week, providing the most comprehensive outline for the project so far. The developments are suggested to take place in phases over the next 10 years, although little information is provided about the design of the barrier it describes as a "wall system".

Trump's border wall, which formed a key pillar of his 2016 presidential campaign, has encountered much opposition, particularly over the growing cost and the timeline of construction.

The US president originally estimated a $12 billion (£9.6 billion) figure, while a report from the Department of Homeland Security that was leaked last year nearly doubled it to $21 billion (£16.8 billion), with completion slated for 2020. With growing concerns over the price, Trump said that he would design or negotiate a cheaper option himself.

There are also conflicting opinions over who will foot the bill – the US president previously said the Mexico's government will pay, but the country refuted this. Earlier this week, Trump announced that funding for the wall would come as a compromise package that would also offer legal status to young, undocumented immigrants under the Deferred Action for Childhood Arrivals programme (DACA).

"We want the wall," he said during a press conference at his Camp David country retreat in Maryland on Saturday. "The wall is going to happen, or we're not going to have DACA."

The structures, chosen as finalists from an open tender, were built temporarily to be tested against attacks from sledgehammers, pickaxes, power tools and other implements. But the petition calls for them to be designated as national monuments under the Antiquities Act of 1906, calling them "historical land art" with "significant cultural value".

It provides a contrasting response from a series of architects and designers that have mocked Trump's wall proposal with satirical designs, like a spoof of an IKEA flat-pack furniture kit that offers a cheap construction option and another that replaces the wall with a dining table.

In an alternative protest, the creators of adult game Cards Against Humanity also recently purchased a vacant plot along America's southern border in an attempt to hinder the wall's construction.