The tender for President Donald Trump's Mexico border wall has been amended, with more details added about the design requirements and the deadline for submissions extended.

The US Department of Homeland Security, Customs and Border Protection updated its notice to give bidders more information about the project, and due to a "revision of strategy" based on feedback on the original posting.

Solicitation for the "design-build structure" was pushed back two days to 8 March 2017, and the cut off for request for proposal (RFP) submissions is now 20 March 2017 – giving bidders longer than the original five-day window set out on 24 February 2017.

New details were also released about the type of structures expected from the prototype proposals.

"For planning we anticipate procuring concrete wall structures, nominally 30 feet [nine metres] tall, that will meet requirements for aesthetics, anti-climbing, and resistance to tampering or damage," says the notice.

Vendors are required to submit concept papers of their prototypes, which will be evaluated and narrowed down.

Those remaining will have to submit a full RFP, including pricing, by 3 May 2017 – again later than the original mid-April deadline. 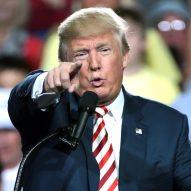 "The intent of this procurement is to acquire and evaluate available wall prototypes and provide some initial construction of some wall segments, but is not intended as the vehicle for the procurement of the total wall solution for the border with Mexico," the notice says.

Last month, Trump suggested that his involvement in the design of the controversial wall would help to bring down the estimated $21 billion (£16.8 billion) it will take for construction.

A variety of satirical designs for the US-Mexico barrier have already been put forward. They include a pink wall inspired by the work of Mexican architect Luis Barragán and a spoof of an IKEA flat-pack furniture kit.

A more serious suggestion was put forward by Miami firm DOMO Architecture + Design, which created renderings showing a series of landscaped features along the border instead of a fence or wall.

In response to the Trump administration's plans, The Architecture Lobby is calling for US architects and engineers to leave their desks and walk out in protest tomorrow.