A prototype of the "beautiful" Steel Slat Barrier that Donald Trump plans to build along the US border with Mexico can be cut using a saw, leaked imagery reveals.

US television network NBC published a photograph showing a large hole cut out of a slatted steelwork prototype – an early version of the barrier that Trump has promised to be "totally effective while at the same time beautiful!".

The image was taken following tests on the mock-up – one of eight constructed near San Diego in Autumn 2017.

Each design was subjected to attacks orchestrated by the US Customs and Border Protection to ensure that the walls would couldn't be breached. Tests involved implements that could be easily accessed, like sledgehammers, pickaxes and power tools.

However, the president claims the sawed wall was an early iteration of an improved design, which he is currently hoping to secure funding for.

"While the design currently being constructed was informed by what we learned in the prototypes, it does not replicate those designs," he said when questioned in a press conference on 10 January 2019, adding that the mock-ups were built by the previous administration.

Dept. of Homeland Security testing of a steel slat prototype for border wall proved it could be cut through with a saw, according to a report by DHS.

A photo obtained by @NBCNews shows the results of the test. https://t.co/SNxn6YneG9 pic.twitter.com/UP9EgHGxDx

Results of the tests were intended to inform the choice of design for the barrier, but have been largely kept under wraps until now. Radio channel KPBS obtained a heavily redacted government document late last year, and reported that all of the prototype structures "deemed vulnerable to at least one breaching technique", with some nearly collapsing.

The Trump administration has continued forward with plans to construct the border wall, which formed a key part of his 2016 presidential campaign, but has encountered many stumbling blocks.

Most recently, the US senate refused to foot the $5.7 (£5.1) billion bill for the project, triggering a partial shutdown of the government that has become the longest in the country's history and is expected to continue for much longer.

The political stalemate has left thousands of federal workers out of pay and forced the Smithsonian museums, including the Cooper Hewitt design museum in New York and the National African American history museum in Washington DC, to close temporarily. 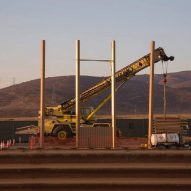 The shutdown came just one day after the president revealed on Twitter a graphic of the "beautiful" structure he plans to build, which was lampooned by designers.

The architecture and design community has also previously mocked Trump's proposal with alternatives like a 1,954-mile-long dinner table and a flat-pack Ikea kit.