A man-made island surrounded by wind farms in the middle of the North Sea could help bring large-scale renewable energy to Europe by 2050.

Dutch energy company TenneT claims its plans for the North Sea Wind Power Hub has the potential to supply 70 to 100 million Europeans with renewable energy in just over 30 years.

Currently wind farm projects are limited by geography and technology. Wind farms close to shore cannot deliver the capacity required due to lower wind speeds and limited space, but farms further off-shore are costly to maintain.

Island would allow wind power to be converted offshore

An island would provide a secure base for technology that could take the power harvested by nearby surrounding wind farms via AC cables and either transform it into DC to transfer it back to mainland power grids, or convert it into renewable hydrogen for large-scale transport to shore.

TenneT says the island "will act as the spider in a North Sea web of offshore wind farms and international connections" and could increase the efficiency of connections between wind farms and the mainland from 40 per cent to a full 100 per cent. The use of interconnecting hubs would also allow countries to trade renewable energy across their borders.

The Dutch company has earmarked Dogger Bank, 78 miles off the English coast, as one such suitable location for an inter-connected power hub.

Dogger Bank is a central point between the North Sea countries (the Netherlands, Belgium, the United Kingdom, Norway, Germany and Denmark), with high wind speeds and relatively shallow water, which would lower the cost of building an island.

A preliminary scan of the area to assess risks to marine flora and fauna made by TenneT showed "both opportunities as potential risks for animals and biodiversity".

TenneT argues that the high volumes of renewable energy needed to meet EU targets are unobtainable without international cooperation and harnessing the economics of the efficiencies of scale.

By turning the North Sea into a distribution hub, Europe's transition to renewable energy could be facilitated. Currently the EU's 2050 Energy Strategy has set a goal of reducing greenhouse gas emissions by 85 to 90 per cent, when compared to 1990 levels.

In a step-by-step plan laid out by TenneT, the Dutch wind farm areas of Borssele, Hollandse Kust and Hollandse Kust will enter service in 2023, then the offshore area of IJmuiden Ver would be developed.

Next a possible co-operation between IJmuiden Ver and the UK's East Anglia wind farming areas could be negotiated, requiring an inter-connector in the form of a Power Link Island. TenneT estimates the timeframe for this to be anywhere between 2025 and 2050, with the island built between 2030 and 2050.

Agreements have already been signed by members of the North Sea Wind Power Hub Consortium, which includes TenneT, Gasunie and the Port of Rotterdam from the Netherlands, Energinet of Denmark and TenneT TSO GmbH of Germany.

Even the most powerful wind turbine only has a 6 megawatt capacity, and until now only 1 gigawatt of wind power capacity has been built off the Dutch coast.

With its low lying geography making it particularly vulnerable to climate change and the resulting rise in sea levels, the Netherlands has positioned itself at the vanguard of renewable energy solutions.

As part of his studio's restoration of the country's coastal defences, Dutch designer Daan Roosegarde developed smart kites that generate kinetic energy from the wind.

Across the North Sea in Sweden, flat-pack furniture giant IKEA has launched a battery-storage solution to complement its solar panel range, allowing households to reduce their reliance on energy grids.

In land-locked Switzerland, Climework has opened the world's first commercial carbon-capture plant, which extracts CO2 from the atmosphere and sells it on as a raw material. 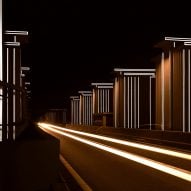