Italian architect Stefano Boeri is bringing his vertical forest model to a social-housing project in Eindhoven, to show how green homes can be provided at affordable rents.

Trudo Vertical Forest is a proposal for a 19-storey building boasting the same tree-covered balconies as the celebrated Bosco Verticale towers in Milan, completed by Stefano Boeri Architetti back in 2014, and many of the studio's other recent designs.

But it marks the first time the architect has proposed using foliage-filled towers for social housing.

The project aims to provide 125 homes, which will be rented out at affordable rates and made available to low-income groups in the Dutch city. These compact one-bedroom apartments are expected to suit to young, single occupants and couples.

The building will also make use of prefabrication and "the rationalisation of technical solutions for the facade", to ensure it can delivered within an appropriate budget.

"The high-rise building of Eindhoven confirms that it is possible to combine the great challenges of climate change with those of housing shortages," said Stefano Boeri.

"Urban forestry is not only necessary to improve the environment of the world's cities but also an opportunity to improve the living conditions of less fortunate city dwellers.”

The 75-metre-high building will have 70 different species of tree and plants set into its balconies.

Each apartment will contain 50 square-metres of floor space, as well as a four-square-metre terrace planted with one tree, plus 20 plants and shrubs. In total, the facade will facilitate 125 trees and 5,200 additional plants.

Stefano Boeri Architetti has proposed numerous plant-covered towers since the completion of Bosco Verticale, in Dutch city Utrecht, Swiss city Lausanne and Chinese city Nanjing. It has also unveiled a vision for an entire city of of vertical forests in China and a colony on Mars.

The aim of the vertical-forest model is allow humans and nature to co-exist in an urban landscape. The biophilic vision is intended to improve the lives of city dwellers, while simultaneously fighting pollution and climate change, by countering the effects of deforestation and improving urban air quality.

According to the studio, the foliage purifies the air around it, taking in carbon dioxide and releasing oxygen as part of a natural respiration cycle.

The Trudo project is expected to absorb 50 tons of carbon dioxide each year. The abundance of greenery will also help to muffle the noise of the city. 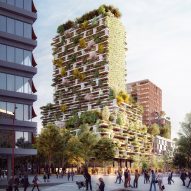 Imagery is by The Big Picture Visual.