People began moving into the residential part of the development, which covers 4.54 hectares and is composed of five towers in total, a few weeks ago.

The complex's two residential towers are 80 metres high and covered in more than 400 trees, as well as other plants and greenery.

Located in Huanggang in China's Hubei province, the plant-covered towers are a new kind of vertical forest that combine open and closed balconies, according to the studio.

The structure of the Chinese complex was designed so that the foliage on the balconies would "fit perfectly" into the facade design.

"The Huanggang version is characterised by the presence of openable bow windows with indoor plants that on their cover host a balcony with a pot for large trees," studio founder Boeri told Dezeen.

This design will ensure that the tenants are surrounded by trees.

"The design allows an excellent view of the tree-lined facades, enhancing the sensorial experience of the greenery and integrating the plant landscape with the architectural dimension," Boeri said.

"Thus, the inhabitants of the residential towers have the opportunity to experience the urban space from a different perspective while fully enjoying the comfort of being surrounded by nature." 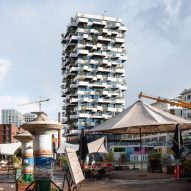 According to the studio, the trees and greenery will absorb 22 tons of carbon dioxide per year and produce 11 tons of oxygen per year.

As well as the tree-covered residential towers, the development, which Stefano Boeri Architetti describes as a "green complex,"  will also house hotels and large commercial spaces.

Easyhome Huanggang Vertical Forest City Complex is the first vertical forest building to open in China and Boeri thinks these types of buildings could be especially suitable for the country.

"In China we are experiencing a great interest in greenery and urban forestry these last years, also as a tool for absorbing the fine dust which is one of the main factors of air pollution in cities," Boeri said.

His studio will also shortly open two vertical forest towers in Nanjing, which were first unveiled in 2017.

"In this country, as well as in Huanggang and Nanjing – where in the next few weeks we will inaugurate two towers of vertical forests to house offices and a hotel– we are designing many different versions of vertical forest, of different heights and nature, in many other cities," Boeri said.

Boeri's earlier vertical forest designs include the very first one, Bosco Verticale in Milan, which contained luxury apartments, as well as his most recent one, Trudo Vertical Forest in Eindhoven.

The Eindhoven iteration of the concept was designed for social housing and features over 10,000 plants.

The photography is by RAW Vision Studio.