Designed for French design brand Petite Friture, the THIN tables include three different shapes: a square, a rectangle, and a triangle.

Steel is used to create both the tubular legs and the slender surfaces of the tables.

They all stand at different heights, so that they are able to nest inside one another, creating a more complex shape when combined.

"They are objects to be observed. Objects in the form of a chair, table or lamp, but objects that play with visual elements, such as form, colour, light or geometry."

According to Enrich, the design is "an amplification of the strength and resistance of a metal".

"A thin tabletop is positioned on oversized legs, which hold it effortlessly," he added.

The tables are coated with grained epoxy paint in a range of colours, including white, burgundy, black, and blue.

Petite Friture was established in 2009, with an aim to champion the work of young French designers. The brand's recent launches include the Abstraction collection, featuring patterned lighting and wallpaper, based on optical illusions and modernist buildings.

THIN forms part of Petite Friture's new Villégiature PF collection, which will launch at both IMM Cologne in Germany and Maison&Objet in Paris, France, later this month.

Other designs in the Villégiature PF range include a sofa by Constance Guisset, patterned wallpaper by Lisa Laubreaux and steel wire shelving by Amandine Chhor. 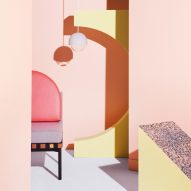