Each year, the Das Haus installation showcases one designer or design studio's take on the present and future direction of interior design.

For the 2020 edition in January, MUT Design focused on blurring the line between exterior and interior, and between architecture and nature, with a project titled A La Fresca! (Step Out into the Fresh Air!).

The studio wanted to do more than just adapt interior design for outdoor use or vice versa; they wanted to explore how home life might change if these boundaries were eased or eliminated entirely.

To that end, their space has five living zones – an Active Area, Cleanness Area, Resting Area, Kitchen and Patio. While some of these have a nearly traditional name and function, others are more flexible and open to interpretation.

For the furniture prototypes inside these spaces, MUT Design wanted the high standards of design and feeling of cosiness to extend across both the indoors and outdoors.

"We don't separate outdoor and living room furniture according to the usual norms," said the studio. "Nowadays, that's the only way the interior design can create a consistent overall picture."

To create the prototypes, MUT Design worked with multiple European brands including Gan, Preciosa Lighting, Sancal, Diabla and Expormim. Several of these brands are now putting the pieces into production.

Among the pieces is the Armadillo chair, launched at Stockholm furniture fair by Expormim, which is a reinterpretation of a papasan bowl chair that was popular in the 1970s.

The chair is made of rattan with a UV-filter coating that protects it from solar radiation, and has removable cushions.

Sancal is manufacturing the Roll chair, which has cylindrical cushions said to be inspired by the leg-press machines found in gyms. The chair is meant to look as attractive stacked and stowed as it is while in use. 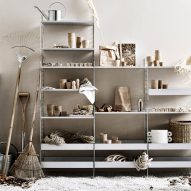 There's also the Zig Zag hammock and rug, made by Gan. Both pieces are made of artificial fibres suited for outdoor use and feature an open weave that is meant to cast interesting shadows.

Another chair, the aluminium Grill, for Diabla is reminiscent of an outdoor barbecue, while the Bao pouffes for La Cividina are more like plush stones. Rounded shapes and playful approaches to weight are common themes across the pieces.

There is also a series of lighting for Preciosa and a set of coloured glass side tables for Pulpo.

The prototype bath collection in the installation will have a future too, as it has been developed into a range with Antonio Lupi that is also likely to launch in Milan.

MUT Design was founded by Alberto Sánchez and Eduardo Villalón in 2010 and is based in Valencia. Among their previous designs are the Twins outdoor chairs for Expormim and the chocolate-bar-like Onza tiles for Peronda. 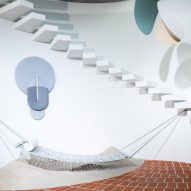