Second Home Holland Park is the third venue that José Selgas and Lucía Cano have created for the London-based company, which provides studio and office space for a community of creatives and entrepreneurs.

The design is intended to respond to the unique cultural history of the building, which was the studio of British fashion photographer John Cowan in the 1960s, and was used by Italian director Michelangelo Antonioni when filming Blowup in 1966.

Later, in the 1980s, Richard Rogers set up his first architectural practice in the building, installing walkways and a staircase designed by then employee, David Chipperfield.

SelgasCano's design involved the restoration of these architecturally significant features, alongside the refurbishment of a photography studio on the building's top floor that recalls its former use.

"Stairs, skylights, a bridge and a vine that Rogers himself planted in the courtyard are bits of his design added to the history of the buildings that we kept as a treasure of modern archaeology," suggested Jose Selgas. "The rest was easy."

The new workspace occupies a total floor area of around 600 square metres, which is spread across five existing buildings from various periods.

Studios are designed to accommodate small teams of up to eight people, while an expanded mezzanine suspended beneath the building's trussed roof provides open workstations. New openings carved into the roof ensure plenty of natural light reaches these spaces.

Like the two previous Second Home venues – the first in east London, and the second in Lisbon – the Holland Park space boasts a biophilic interior design that aims to promote health and wellbeing.

There are 35 trees planted throughout the interior, as well as many other plants positioned around the office.

Glass-walled rooms provide private offices and meeting rooms on the ground floor, where a courtyard cafe is sheltered beneath a transparent plastic canopy.

The double-layered roof was developed in collaboration with environmental engineer Adam Ritchie, who devised a technique for insulating the space by filling the gap between the surfaces with soap bubbles.

Second Home was founded in 2014 by Rohan Silva – a former special adviser to the UK's former prime minister, David Cameron – and Sam Aldenton.

The pair unveiled their plans to move into west London in late 2017, claiming the project would help address a significant decline in affordable workspaces and creative venues in the area.

"Years ago, the part of the city that needed more cultural investment was east, but today, interestingly, west London needs attention," Silva told Dezeen at the time.

Their vision is the Holland Park space to become a hub for spoken word and poetry, celebrating the literary heritage of the area.

To achieve this, the courtyard cafe will host poetry events presented in partnership with publisher Faber & Faber, which will also operate its first ever physical bookshop within Second Home Holland Park.

"When it comes to design, we'll never do the same thing twice – that's just boring," said Aldenton. "I love the way SelgasCano responded to the rich cultural heritage of the building, and created something totally unique, and yet recognisably Second Home." 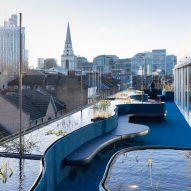