Readers aren't happy about the use of the phrase "parasitic pods" to describe a housing concept for homeless people, in this week's comments update.

War of words: commenters shared their disappointment about the terms used to describe this concept by creative agency Framlab, for hexagonal homes attached to the sides of New York buildings.

Nick Anaclerio was exasperated: "Boy do we really need to give soulless elitists another reason to characterise the urban poor as 'parasites'?"

"Yeah, not sure how they thought the word 'parasitic' was okay to use in this context," agreed Alison S.

"In my view, banksters deserve this accolade," stated a rebellious Takki.

"It might not be the best but at least it's a start for something. This design was probably inspired by parasitic plants as they survive by getting help from other plants, it has nothing to do with looking down on homeless people," fired back Zaber Ahmed in defence of the term.

"The language of this will have to change in order to be successful. I don't think it's a bad idea in itself. It's a clever way to address a problem that needs multiple solutions working in tandem." Matthew Sonnenfeld argued pragmatically.

This reader used irony to express their disappointment in the project:

Are Framlab's parasitic pods a feasible answer to New York's homelessness problem? Have your say in our comments section ›

Out of place: Sean Griffiths' opinion piece for Dezeen, comparing some architects' focus on place-making to social cleansing, annoyed some readers, while others saw some validity in the argument.

James Hennessey felt the thought piece was revealing, but maybe not how intended: "This says to me more about the insecurities of architecture rather than the 'dangers' of placemaking. The wonderful complexity of places is, of course, impossible for the architect to control."

"Architects concerned about this issue might need to evaluate the motives of their clients before taking on jobs?" asked a non-plussed Carol Jane Williams.

"I think that there is a hope in many architects' minds that if a physical structure is well-considered enough, that the social and behavioural structures will follow suit in order to properly inhabit the place," argued an optimistic Jacob Volanski.

But Beau Frail could see where Griffiths was coming from: "Placemaking is people-making and must include public space created by communities. Place-making isn't about architect-making, city official or developer making."

One reader had a simple yet philosophical response.

Water under the bridge: Alan Dunlop's proposal for a bridge between Northern Ireland and Scotland, in response to the recently proposed "Boris Bridge", had the support of the Democratic Unionist Party and some readers this week.

"I will state categorically that I abhor the DUP. Their backing aside, I think that a bridge between the north of Ireland and Scotland would surely benefit the two regions economically, socially and culturally," admitted Mr Walnut Grey.

Rory was less sure: "Insanity before you even factor in the physical geographical conditions let alone the weather in that area."

But Peter Cosgrove felt the project would be useful post-Brexit: "Some hypocrisy I see; folk that want stronger ties to Europe but reject closer ties with the UK mainland."

This reader was ready to start construction.

Floral tribute: readers seemed to agree with local Parisian artists who had written an open letter to Jeff Koons to express their dismay at his use of "product placement" for a terror attack memorial in Paris.

Mister Sterling felt the installation was totally unsuitable: "I totally agree with the Paris artists. The French don't memorialise like we Americans do. And this memorial makes zero sense. It is cynical."

"Koon's new brain fart for inflating ugliness – kindly 'gifting the idea'. And he wants people of France to give him a nice public spot and pay for this?" fumed MM.

Tom from Finland was defiant in his opinion: "A successful piece of art by Jeff Koons, whether you like it or not."

One reader could just about believe it: 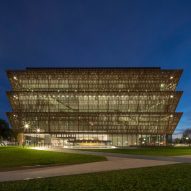 This week, Design of the Year and London's best house extension were announced