Tom Dixon's Delaktig bed has launched at IKEA stores, alongside a furry fabric cover and a collection of modular elements that allow users to customise and "hack" the furniture.

Branded by Dixon as a "living platform", the modular bed was first announced last year – but is being rolled-out across Europe stores from today, 1 February 2018.

Designed to adapt according to different uses, it comes with a series of add-ons that change the furniture's purpose.

Labelled as "hacks", these add-ons follow in the footsteps of the popular IKEA trend that sees buyers revamp the affordable furniture to suit their own styles and specifications.

But Dixon called the Delaktig bed the first "authorised hack" of an IKEA product during an interview with Dezeen at Milan design week last year.

"So, this is the plan – you can go to IKEA and you can buy yourself a bed. It's an affordable bed. If you want, you can add components to make it into a sofa. Once you've got this bed sofa you can add on our hacks, other people's hacks, or you can hack it yourself," he said.

When plans for the bed were first unveiled last year, IKEA and Dixon said it would come with a variety of additions, allowing it to be modified to fit different functions throughout its lifetime – but didn't go into detail about what these would be.

Now available for purchase, the pair has revealed these hacks to include heavy-weight task lamps, coffee and side tables, magazine racks, and soft furnishings.

"The general idea is that, just like with your iPhone, people can build apps around this sofa which will allow them to adapt it for a longer life," Dixon told Dezeen at Milan design week 2017.

"The success of this will be if, in 30 or 40 years people have changed its functionality, it's still survived rather than just being discarded," he added.

Made from extruded raw aluminium, both the frame and the hacks are said to be "robust enough to last a lifetime".

A series of grooves running down the structure allows users to clamp, slot or bolt the hacks onto the sofa to change it into a space suitable for work, entertainment, or sleep.

These grooves enable the Delaktig to be transformed from a single bed into a chaise longue or a three-seater sofa – but it also has the potential to become a twin bed, a bunk bed, or a four-poster bed.

Extra accessories, such as the Boom Light floor lamp and an attachable side table, can then be used to further expand its functions.

Other hacks include a magazine rack, which also doubles up as an attachable side or back panel.

As well as capitalising on the trend for hackable IKEA furniture, this type of modular product is in keeping with IKEA's move towards more sustainable production, which recently saw it create a chair using reclaimed wood chips and recycled plastic. 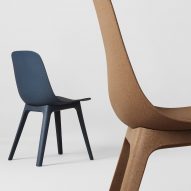