Metallic paint, perforated aluminium and black rubber are combined to give this Manhattan espresso bar by Only If Architecture a futuristic feel.

Voyager Espresso provides a caffeine stop in the concourse of the Fulton Street subway station, in Manhattan's Financial District.

Named after the Voyager space programme, the cafe is the first location from an Australian team that credits itself with taking a "scientific approach to coffee", and wanted an interior design to reflect this.

Only If was commissioned to transform an unusually shaped retail unit, and intentionally steered away from the stereotypical appearance of boutique cafes.

"From the beginning we knew we wanted to avoid the clichéd language of white tile, reclaimed wood, and exposed Edison bulbs," said Only If principal Adam Snow Frampton. "The material palette we developed is inexpensive yet futuristic."

The layout of the compact space is based around a pair of circles. One forms the service counter in the centre of the room, while the other provides a corner seating nook.

The circular bar allows two baristas to work efficiently without getting in each other's way. Stations for brewing the coffee, preparing light snacks, storing crockery, washing up and more are all laid out radially.

Extra seats are provided by stools along the side wall and beside the glass frontage, where perforated aluminium counters are placed.

"The layout creates a variety of different social settings for seating, from individual to collective, intimate to exposed," said Only If.

The walls are made from oriented strand board (OSB), which is coated in aluminium enamel paint to give the wood-based material a metallic sheen.

Only If was recently chosen as one of five winners of this year's New Practices New York awards, which celebrates the city's best young architecture studios. The firm's other projects in the city include a flexible workspace for three companies, which also has a futuristic aesthetic.

Photography is by Michael Vahrenwald and Esto. 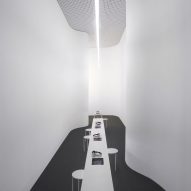