Architect Grzegorz Layer has used lengths of blackened wood to clad the asymmetric gables of this house, which is located near the pine-forested shores of Lake Gowidliński in northern Poland.

With most of the site covered by trees, the Polish architect decided to cover the building's compact frame in blackened boards, a traditional regional building material that complements the natural setting.

Conversely, the interior of Kashubian House is clad almost entirely in untreated pine, forming a bright open-plan area lit by large irregularly shaped windows that frame vistas of the woods.

"The idea behind this project was to create a simple, functional and economic building which can be used all year round," said Layer. "Its asymmetrical form is a result of the functional arrangement of the interior."

The ceiling height afforded by the off-centre gable allows for a mezzanine level with a guest bedroom and gallery overlooking the main living space. The open-planned arrangement makes the building's compact floor plan of just 67 square metres appear spacious.

Layer is adept at creating minimalist interiors and while renovating a former sewing factory in Katowice, the architect transformed the space into a menswear store with plain plaster walls and a concrete floating staircase.

The ground floor of Kashubian House is almost entirely open planned, with the living, dine and kitchen spaces opening out onto a decked terrace.

Black kitchen units with a sink, hob and wood store sit flush against the staircase, with a duel-sided wood burning stove at one end. Simple black and white pendant light fittings hang from the underside of the angled roof.

The staircase separates the open-plan space from a series of private rooms, comprising the main bedroom, bathroom and toilet. The rooms are built in under the mezzanine level, with individual doorways opening on to the three rooms.

Twists on traditional dark gabled cottages have been particularly popular in Poland lately. Polish studio HOLA Design recently completed a gabled cottage with huge windows set into its A frame to provide views of nearby castles.

Robert Konieczny created a house for his own family set into a hillside in southern Poland. Jutting out from the landscape, the concrete "ark" is fully glazed down one side and features a fully functioning drawbridge. 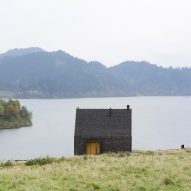