Both are based on a bespoke room divider originally made for an exhibition of the Bouroullec brothers' work in Rennes, northwest France.

The Chainette curtain, named after the French term for "little chain", has a slightly three-dimensional braided stitching that depicts a looping pattern.

It is available in a range of white a grey tones with many choices of stitching, including yellow, green, orange and blue.

Rennes features a series of wide, diagonal and vertical stripes, which intersect to create geometric shapes of varying transparencies.

It is available in five colours, green, blue, pink, purple and yellow, and two shades of grey.

"As light conditions change over the course of the day, Rennes and Chainette play with light and shadow, revealing new, subtle nuances," the designers explained.

"They share a handcrafted look, which is accentuated by small irregularities on their surfaces," they continued.

The project follows on from a number of products designed by the Bouroullecs for Kvadrat.

Rennes and Chainette are currently on show at Stockholm Furniture Fair, which takes place as part of the city's design week until 10 February 2018.

Other products on show at the fair include a chair made from flax fibres and bio-resin and a furniture collection that pays homage to the 1970s. 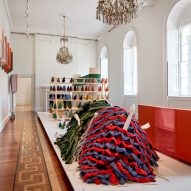 19 designers reinterpret one of Kvadrat's most popular fabrics