A winding road of white concrete becomes an integral part of House on the Road by Robert Konieczny's studio KWK Promes, for a riverside plot in Poland.

The white concrete road runs from the entrance gate to the centre of the plot, where it appears to fold up to create the ceilings, roof, walls and terraces of the building.

Although the client wanted a replica of his current apartment, Konieczny wanted to create a building that would work with the site, high on the bank of the Vistula River.

"He took me to his apartment and he drew me a plan of his future house. I realised that he drew a plan of the apartment we were sitting in," Konieczny, founder of KWK Promes, told Dezeen.

"I said 'OK, but, you know, we could do it much better' – but he didn't want to take any risks. To make matters worse, he showed me a catalogue with terrible examples of architecture he wanted it to look like.

The house is raised as the owner wanted all the living spaces to be on the first floor, so he would to feel safer within the building. He also wanted to locate the home in the centre of his large plot and connected to a jetty on the river.

"This idea came up. We thought that if we have to connect the house to the river by a road anyway, let's make it a design motif," said Konieczny.

House on the Road was named both for the road it sits within, and the concept of finding a solution in the middle of the road.

In the middle of this concrete shell hides the client's former apartment, recreated exactly.

On the other side of the house the concrete road continues, meandering between trees down the slope and flowing down to meet the river.

"In effect we obtained what was the most important for us, and for our client," said Konieczny. 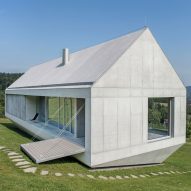 "The house will be just a part of the riverside landscape. From the opposite bank of the river the building is one of many similar to it, and from the perspective of the neighbouring hill you see only another elements of this landscape – the road."

Built on two levels, the House on the Road encompasses 599 square metres. The ground level, wrapped in glazing, contains a garage and a private gym.

The upper level houses all other functions, including a sitting room, kitchen, dining room and bedroom.

Huge sliding windows on both levels have spectacular views over the Vistula Valley. An observation deck on the terrace of the first floor morphs into a ramp that connects the house with the ground floor level.

Robert Konieczny's houses often play with form, including an angular, ark-like house perched on a hillside and the Quadrant House, which features a piece of kinetic architecture that tracks the sun's movement.

Photography is by Olo Studio, Juliusz Sokołowski and Jarosław Syrek.