Burberry has updated its classic tartan using rainbow-hued stripes in support of LGBT charities, which will be unveiled during the upcoming London Fashion Week.

Burberry describes it as an "emblem for optimism and inclusiveness".

Designed by creative director Christopher Bailey as part of his final Burberry collection, the new tartan will feature during the brand's London Fashion Week show on 17 February 2018.

In a statement, Bailey – who announced his departure in October 2017 – said he wanted to dedicate his final collection to the "best and brightest organisations supporting LGBTQ+ youth around the world".

"There has never been a more important time to say that in our diversity lies our strength and our creativity," he said.

To coincide with the reveal of the new tartan, Burberry also announced it had made substantial donations to three LGBT charities: the Albert Kennedy Trust, the Trevor Project and the International Lesbian, Gay, Bisexual, Trans and Intersex Association (ILGA).

Both the new tartan and charitable donations are part of the brand's wider commitment to "solidifying the support of LGBTQ+ communities". 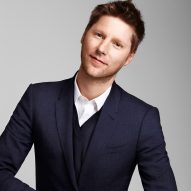 Christopher Bailey bows out of Burberry after 17 years

The initiative has been spearheaded by Bailey, who joined Burberry as design director in 2001, and has since been credited with the brand's transformation from a small outerwear business to a global luxury label.

After his appointment as chief creative officer in 2009, Bailey steered the brand through a number of big business decisions, such as the choice to make collections available to purchase straight after they are shown on the runway, as opposed to the typical four-month delay.

His leadership also saw Burberry team up with The New Craftsmen to showcase the work of designers and craftspeople in an old Soho warehouse, during London Fashion Week in September 2016.

He will depart the British fashion house in March 2018 to pursue new creative projects, but will continue to provide support to CEO Marco Gobetti until December 2018 – a period that the company has described as transitional.

Burberry was founded in 1856 by 21-year-old dressmaker Thomas Burberry. The brand is most famous for its trench coat and distinctive tartan pattern, which has become one of fashion's most widely copied trademarks.