The developer of a luxury urban quarter in Hamburg has agreed to remove a sign designed "as a tribute to the 20s" after critics compared it to concentration-camp signage.

The typographic entry sign, designed by Berlin-based agency Polyform, will be dismantled as soon as possible, developer Quantum told Dezeen.

"All involved people were depressed because of the bad associations," a spokesperson for the developer told Dezeen. "Never before had anybody criticised the letterings, [which was] intended as a tribute to the 20s."

The Stadthöfe project, in the centre of the German city, involves regenerating a cluster of former administrative buildings linked by a warren of passages and courtyards and built between 1888 to 1916.

One of the buildings served as the headquarters of the Nazi secret police service the Gestapo from 1933 to 1943, which used basement cells to torture opponents of the regime.

According to the designers, the new metal sign was intended to invoke street insignia found in Paris and Hamburg in the early 20th century. Spanning the entrance to a passage, it bears the greeting: "Bienvenue moin moin Stadthof," combining the French word for "welcome" and the local expression "moin moin," which means "hello". "Stadthof" is the name of one of the buildings in the quarter.

But protestors claimed the sign resembled the infamous wrought-iron gateways bearing the legend "Arbeit macht frei" – "Work will set you free" – that hung were set above entrances to Nazi concentration camps including Dachau and Auschwitz.

The developer's spokesperson said the resemblance had not been noticed during the development process and had been signed off by several official bodies.

"The signage was developed by renowned designers, international architects and authorised by lots of authorities like the Ministry for Urban development, the Historic Preservation Office and the former Hamburg building director," they said.

Design studio Polyform, which specialises in "developing brands, design appearances and design guidance," has previously worked with high-profile projects including the Museum Island, the State Library, and the Jewish Museum in Berlin.

The design team selected the font Arquitecta to signpost the development, a sans-serif typeface developed in 2014 by Chilean foundry Latinotype as an interpretation of the geometric fonts of the 1920s.

"The control and information system delves sensitively into the character of the architecture and is coordinated with the listed facades," Polyform said in a statement.

Quantum are converting the site into an urban quarter containing 88 rental apartments, along with a luxury hotel, restaurants, shops and office space.

Hamburg's Senate sold the townhouses to the developer in 2009, with the caveat that "worthy commemoration" be made to the location's dark history.

"There, the Nazis organised the persecution of Jews, homosexuals, Roma and Sinti and the entire political opposition. And because the townhouse was so important, the central memorial for the Nazi terror in Hamburg has to be built there," ex-police chief Wolfgang Kopitzsch told the Hamburger Morgenpost.

Although the signage will be removed, the developer and city officials have rejected protestors claims that the memorial area of the development is too small, or that it is compromised by the addition of a bookshop and cafe.

"It will be the first time, the atrocities of the Nazis will be made visible at this place – more than 70 years after the end of the second world war and decades of authority usage," said the Quantum spokesperson.

Hamburg's Ministry of Culture formally said that the developer had fulfilled the terms of the purchase agreement in a statement made on 29 January 2018. The permanent "place of remembrance", totalling 250 square metres, will be located on the ground floor with exhibitions curated by the City of Hamburg.

Another area of the development, still in its original condition from the days of the Gestapo occupation, has been earmarked as a secondary exhibition space. A tunnel that once lead from the basement detention cells to the interrogation rooms will become the "passage of sighs". The exhibition space and bookshop is due to open in May.

Recent high profile projects in Hamburg include a philharmonic hall by Herzog & de Meuron complete with a luxury penthouse apartment, and David Chipperfield was announced last week as the winner of a competition to build the city's tallest tower. 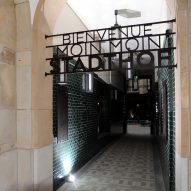