The drum-shaped pavilion was designed by Carmody Groarke to be a visual marker for the Mehr! Theater, which operates within the still open Bernhard Hermkes-designed Grossmarkt wholesale market.

"As one of the only hospitality spaces on the vast 27-hectare industrial site, the pavilion's form marks the beginning of the theatre experience, and is intended to be a distinctive counterpoint to Bernhard Hermkes' market building," said Carmody Groarke architect Lukas Barry.

"The exterior form is deliberately simple, intended not to give away too many clues to its interior hospitality functions; creating a dramatic moment for guests when entering," he told Dezeen.

The single-storey aluminium-clad building contains amenities for the 1,700 seat theatre including a ticket office, toilets and a large space for visitors to have refreshments at show intervals.

Its circular form was informed by the building's continued use as one of Germany's largest fresh produce markets and the flow of large trucks and people that use the site.

"The pavilion's drum-like shape was derived from carefully studying the patterns of the working fruit market," said Barry.

"We tested a number of initial forms, and an important consideration was the almost continuous movement of lorries which tend to move in long sweeps around the large market forecourt," he continued.

"The circular form allows market traffic to continue uninhabited; while in theatre mode, the building form acknowledges visitors arriving from lots of different parts of the site, so there is not necessarily a front or back."

Carmody Groarke wanted to ensure that while being clearly recognisable the modern addition to the site did not detract from the original concrete market, which was designed by Hermkes and completed in 1962.

The ticket pavilion has a low-lying profile to preserve views of the market and its distinctive roofline.

"Hermkes' Grossmarkt is a monumental building, but it has a subtle lyrical quality to its structure, which is formed of curved concrete trusses that are only visible inside," said Barry. 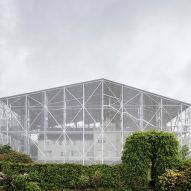 "The Grossmarkt's tripartite facade appears from afar to be unadorned and pragmatic, but actually has a beautiful hand-cut stone relief. We were interested in how we could make a new building in front which could feel immediately familiar, without competing with its dominant neighbour."

The building is arranged around the central, square-shaped main hospitality room, which has a small courtyard at its centre. In this main space, the building's shiny walls are contrasted with its cross-laminated timber frame, which has been lacquered black.

Around the main room four curved, segment-shaped spaces contain the toilets and ticket offices that have windows to the outside. A walkway covered by a cantilevered roof wraps around the building so that people can queue undercover.

"The exterior of the pavilion is clad in a natural finished bright corrugated aluminium which pick up the tones of Hermkes' Grossmarkt, and subtly reflects the activity of the surrounding market as one moves around the pavilion," explained Barry.

"Internally, the radial cross-laminated timber frame is left exposed, but treated with a black lacquered finish – creating a theatrical intimacy and a contrast to the vast Grossmarkt's forecourt."

London-based Carmody Groarke was founded in 2006 by Kevin Carmody and Andy Groarke. The studio recently created a new entrance to the British Film Institute's home on the South Bank in London. It has previously renovated the Members' Room at the V&A and designed a boat museum on the shore of Windermere.