Germany is to make public transport cost-free in five cities, as the government attempts to meet pollution targets set by the EU.

Bonn, Essen, Herrenberg, Reutlingen and Mannheim will begin trialling the free system by the end of the year, according to a letter obtained by German media on Tuesday 13 February 2018.

Die Welt reported that the letter – penned by a group of German ministers – said Germany was "considering public transport free of charge in order to reduce the number of private cars" in the cities.

In addition to the free public-transport trial, the letter detailed ideas for implementing low-emission zones, as well as ways the country could incentivise the use of electric vehicles.

The moves could radically change commuting behaviour, and potentially influence the future development of the cities' infrastructure.

This string of commitments comes soon after the European environment commissioner Karmenu Vella threatened Germany – as well as eight other nations – with legal action after it failed to reduce its toxic air-pollution levels to meet regulations.

The country is now working fast on plans to reach safe targets. Ministers stated that "effectively fighting air pollution without any further unnecessary delays is of the highest priority for Germany".

The nation has already moved to ban petrol-powered cars in favour of electric vehicles by 2030. It has also started using the world's first zero-emissions passenger trains, which only emit excess steam and condensed water into the atmosphere.

Germany won't be the first country to adopt a "zero-fare" system – several have tried, with mixed results.

American cities Seattle and Portland both experimented, but opted not to create a permanent system. Meanwhile the Belgian city of Hasselt got rid of fares in 1997, only to reintroduce them in 2014.

The most successful example is Estonian capital Tallin, which has had a largely positive response to its decision to abolish fares in 2013 – a decision that was also fuelled by an aim to be more sustainable.

Other countries that were named and shamed by Vella for failing to reach air-pollution targets include Spain, France, Italy and the UK.

The UK in particular has been previously criticised for having a "weak" strategy for cleaning up its air – even though pollution is thought to be the cause of up to 40,000 premature deaths a year in the country.

Like Germany, the UK has committed to electric vehicles. In 2017, it published its own document stating it will ban sale of all diesel and petrol vehicles from 2040, in an effort to make "almost every car and van on the roads" zero-emission by 2050.

Dezeen reached out to Transport for London (TfL) to see if it thinks a no-fare public transport system could also work in the English capital – but is yet to hear a response.

According to the Independent, a spokesperson for the European Commission has confirmed that all infringing countries have submitted proposals setting out plans to improve their emissions. 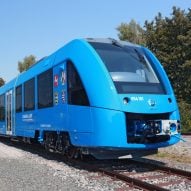