The sale of single-use plastic tableware and certain takeaway containers will be prohibited in England starting this autumn, the UK government has announced.

Once the regulation comes into effect in October 2023, these items will no longer be offered by retailers, food vendors or takeaway restaurants, the government said. 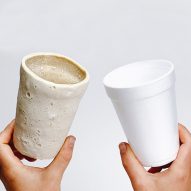 The aim is to cut down on the 2.7 billion pieces of single-use cutlery and 721 million plates used in England every year – only 10 per cent of which is recycled.

"We all know the absolutely devastating impacts that plastic can have on our environment and wildlife," Coffey explained.

"Plastic pollution takes hundreds of years to break down and inflicts serious damage to our oceans, rivers and land," the government added.

"It is also a major source of greenhouse gas emissions, from the production and manufacture of the plastic itself to the way it is disposed."

Ban dismissed as a "nowhere near enough"

The ban will not include pre-packaged food items sold in supermarkets and shops, as the government said these are set to be included as part of an Extended Producer Responsibility Scheme aimed at encouraging plastics manufacturers to meet higher recycling targets.

England follows in the footsteps of Scotland and Wales, who prohibited the sale of single-use plastic plates and cutlery last year, and lags more than a year behind the European Union, which enacted similar legislation in July 2021.

This has led campaigners including Steve Hynd, policy manager at environmental non-profit City to Sea, to critique the ban as doing "nowhere near enough to tackle the plastic crisis we face". 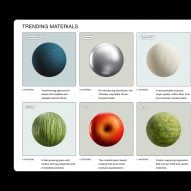 "We are really just playing catch up with some minimum standards," he told Dezeen. "Many of our neighbouring countries have gone further and faster. France, for example, has banned all single-use from being served in restaurants and bars."

"Wales is including single-use plastic bags in its ban," he added. "If we were really world leaders we would have implemented this ban years ago and it would sit as part of a much wider plan to reduce single-use plastics as a whole."

England's ban on single-use plastics has so far only included straws, stirrers and cotton buds, as well as the microbeads found in cosmetics.

The country has also enacted a 10-pence charge for single-use plastic bags in shops, which according to Coffey has cut sales of the carriers by over 97 per cent in the main supermarkets.

Going forward, the government said it is "carefully considering" measures to target other commonly littered items such as wet wipes, cigarette filters and sachets – either via mandatory labelling or a full-out ban.

"The plastic sachet, the ultimate symbol of our grab-and-go, convenience-addicted lifestyle, should be the next target in DEFRA's sights," Sian Sutherland of environmental organisation A Plastic Planet told Dezeen.

"Twelve months ago, our government committed to such a ban. Let's make this a true world-first for the UK instead of just following Europe's faster footsteps."

England is also planning to enact a deposit return scheme for drinks containers to encourage recycling, which has been in use in Germany and several other European countries for a number of years. 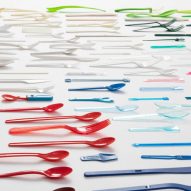 The country backed the creation of a "historic" UN treaty, which is set to be drafted by the end of 2024 and will regulate plastic production and pollution on an international scale for the first time. However, England has so far failed to set its own plastic reuse and reduction targets.

In lieu of more stringent regulation, designers and material researchers have started developing their own plastic alternatives over the last few years, ranging from mealworm polystyrene cups to clingfilm made from waste potato peels.

More than 100 examples of these materials were recently compiled into an online database, which hopes to help architects and designers source plastic-free materials for their projects.

The top image by Heiko Prigge shows the Spoon Archaeology exhibition at the 2021 London Design Biennale.