Swedish brand Voice has a launched a collection of "fundamental" furniture for the modern home, based on the concept of basics in fashion.

Designed to be highly functional, accessible and long-lasting, Voice's range is intended to include everything that is needed for the modern home – just like the essential garments that form the basis of a wardrobe.

The collection was overseen by designer Mattias Stenberg, who was brought on as a creative consultant at Voice in early 2017. It includes five of his own designs, as well as pieces by acclaimed Swedish designer Nina Jobs and London design studio Cate & Nelson.

"The designs from Voice are made to last, both functionally and aesthetically," said Stenberg.

"It's about restrained forms with detailing at a very high level," he continued. "To create design that's understated but not austere, means you have to take great care of proportions, colours and tactility. The visual expression of the Voice collection is low-key, but the user experience is warm and inviting."

The five products that Stenberg has created for the brand include an upholstered daybed that transforms into a sofa and a generously proportioned stool, both of which are very simple in form, with minimal detailing.

"The difference between austerity and what we do lies in the detailing and the craftmanship," explained Stengberg. "I wouldn't call it minimalism, but perhaps reduction. An editing of the object down to something very natural."

His other designs include a stackable American ash storage trough, a 1960s-inspired cabinet in American ash veneer with chamfered edges around the doors, and a matching sideboard that can be stacked to create a shelf or a room divider.

Cate&Nelson's contribution is a wall mounted shelf system. Designed to be easy to assemble without the use of screws, it is made in American ash with concealed hanging.

"We are trying to soften up the Scandinavian design language a bit, make it more accessible to an audience in other countries," said Nelson Ruiz-Acal of Cate&Nelson.

"These are products that are very Scandinavian, very low-key and straightforward with great attention to details, but at the same time very approachable to the consumer."

Nina Jobs completes the collection with her stand-alone, transparent shelf, called Tre. It features a frame in American ash and shelves in lacquered metal, which are bent for strength but also to give an impression of lightness.

Voice was originally founded in 1997 by Rolf Fransson and Anders Magnusson. The pair took their cues from the automobile industry, creating furniture by buying components from other suppliers and then assembling in their own factory.

Today, the brand has no factory of its own, but cooperates with a number of carefully seleted suppliers, chosen for their skill.

The 2018 collection was launched at the Stockholm Furniture Fair earlier this month, as part of the city's annual design week. Other launches at the fair included a chair made from bio-resin and a collection of 1970s-inspired furniture by Fogia. 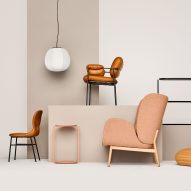 Fogia launches furniture collection that pays homage to the 1970s