Building an Apple Store may be the best way to safeguard the civic character of Melbourne's Federation Square, argues Michelle Tabet.

It is hard to dispute that Federation Square is one of Melbourne's most successful architectural projects ever. With its angular architecture, stepped public realm and active programming, it is a true 21st century public square. And over the past 20 years, against all odds, it has become the beating heart of the city.

So it's no surprise that Apple is keen to locate a flagship store in Fed Square, which it claims will "complement the original vision for the precinct, increase public space and provide a daily programme of activity to inspire and educate the community."

What we're really talking about here is a pagoda-like two-storey pavilion and 500 square metres of public space, replacing the commercial Yarra Building that frames the southern side of the site. This – dare I say it – significant change, is proposed with the blessing of the Victorian planning minister, who approved the scheme and exempted it from public exhibition.

Not everyone is outraged by the same aspect of this proposal

The public reaction has been immediate and vehement: don't touch our square. Or at least don't do it without consulting us. The proposal has generated a flurry of architectural advocacy via Change.org petitions, Instagram posts, opinion pieces, debates, open letters and a staggering 800+ submissions to Melbourne City Council rejecting the project.

However, not everyone is outraged by the same aspect of this proposal. For some it is an encroachment of public space, for others it's bad architecture. For most though, it is an utter disregard for due planning processes and public consultation.

The question is, can an Apple Store really be part of the success story of Fed Square?

In my view, the most objectionable thing about this proposal is not that it is retail or that it replaces the Yarra Building. It is the way in which Fed Square has seemingly chased Apple to become a "silver-bullet" tenant and, in doing so, has surrendered the power to influence the proposal for the public good. 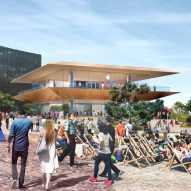 To explain this position, it's important to put a few things on the record.

In the words of Donald Bates, one of the original architects of Fed Square, the key to the square's success was that the design team were "designing relationships" as opposed to designing objects. The way the built form framed the public realm was the core of their idea, not the specific expression of the built form.

According to Bates, The Yarra Building itself was "never right". So it would be fair to suggest that that its removal could actually constitute an improvement to the square.

I would argue that its replacement, with something in keeping with the spirit and character of Fed Square, could work well. And a retail presence – one of the drivers of the square's success – would not be out of bounds at all.

After 20 years, my guess is the cost of running such a highly activated and utilised space has become clear. And, as Bates reminds us, "a major corporate tenant such as Apple will go a long way to re-balancing the operational impost". So while there is current outrage for what is considered Apple's overreach on the site, something like this was bound to happen, given the financial imperative. Apple may even be the lesser of all evils, an elegant solution to a real operational issue for Fed Square.

It's not hard to imagine a range of other cashed-up tenants that could have been a far worse fit. A casino? A tower of apartments? A discount brand? But even if worse can be imagined, it still doesn't mean that the proposal is good or suitable. And if elegance is what we're after, then it's fair to say there is still a way to go. And here's why.

The pagoda-like design proposed by Foster + Partners is jarring, if not utterly inappropriate for this context. In fact, several defenders of the scheme have shown themselves to be ambivalent about the design itself. Engaging a starchitect does not a project make good. In fact, the opposite can often be true.

Apple has been working with Foster + Partners for years now, on its own headquarters in Cupertino no less. And if you look at that project as a benchmark for how the brand might approach an Apple presence anywhere else in the world, you would have a right to be concerned. Apple Park is the closest thing to a spaceship to have landed on earth. It's inwardly focused, immense and circular, creating a complete sense of disconnection with the surrounds.

So with the reveal of the glass pagoda, and its disconnect to the distinct and well-established architectural language of Fed Square, the fears that the architecture could be unsympathetic and crass are well-founded.

To pull this off, Apple will have to resist the temptation to be overtly self-promotional or commercial. The design will have to be a marked departure from the brand's current approach, if it is to justify saying there is a public or educational benefit, and if it is justify any control over the public-realm component of the square.

The final straw – which to me could determine far more than just the architecture of the store – is the fact that Fed Square had to apply to Apple to be considered as a location. The power is now with Apple, not with Fed Square or its management. It holds the cards and the finances, and we have to trust it to be a responsible urban citizen.

Here is where I become very sceptical. We design and evolve the city for the people by the people, not for customers by Apple. If Apple are prepared to be a part of this discussion, to play by the rules (including the planning rules), to have its proposals scrutinised by the public and to adapt its vision so that it works for the city, then there is a chance this could be a success.

In the meantime, what has become apparent is that Melbourne's citizens are empowered to talk about the future of their city and to take action. In debating what is right for their city, it is important that they don't fall into clichés of idealism. Because the debate will inevitably evolve, to question why Fed Square must operate on a model that sees it pay for itself, when the state government is happy to pay enormous sums for large-scale sporting events like the Grand Prix.

To me, it seems obvious that there are tangible economic benefits to maintaining the square's civic character. Contrary to many, I think this can be maintained with more retail, just not invasive and colonising retail. And there is a difference there.

Michelle is the founder and director of Sydney-based urbanism and strategic design agency Left Bank Co. She was the co-creative director of the 2016 Australian Exhibition for the Venice Architecture Biennale, The Pool. Her practice focuses on project definition, design excellence and stakeholder engagement across the public and private sector in Australia and internationally.
Read more: