Stefano Boeri Architetti has designed three schools in Albania's capital city, Tirana, that will remain open around the clock to double as community hubs.

While schools typically are shut to the public after classes end, Italian studio Stefano Boeri Architetti has proposed making use of the buildings 24 hours a day, 365 days of the year.

After school hours, the three red-brick and white cement buildings that reference existing Italian architecture in Tirana, are intended to be used as cultural venues or to host meetings.

"The school must be open to a new rhythm of life. It must be an active place in all the hours of the day, every day of the year, for everyone, at all ages: grandparents, young people, local associations, creative enterprises, institutions," said studio founder Stefano Boeri.

The schools will be constructed within the Tirana Master Plan conceived by Grimshaw Architects to cover an area of 15 square kilometres in the north-west of the city.

The largest of the educational buildings, the Kodër-Kamëz School, will combine a nursery, pre-school, middle school and high school facilities across a 11,898 square metre plan.

Don Bosco School will also have a nursery and pre-school education, as well as a middle school and high school in a single building, with a floor plan of 9,812 square metres.

Finally, Shqiponja School will host a nursery, pre-school education and a middle school in a 7,898 square metre building.

The heart of one school will be a planted courtyard-cum-playground, while visuals for another show pockets of greenery dispersed throughout a building with green roofs.

Milanese architect Stefano Boeri and his team are best known for his plant-covered architecture called Vertical Forests, and the plans for the schools show the buildings surrounded by verdant grounds.

Boeri recently attracted attention for his suggestion that planting could be used as a deterrent for vehicle-led terrorism, proposing a system of tree barriers that will be adopted in the Italian city of Florence. 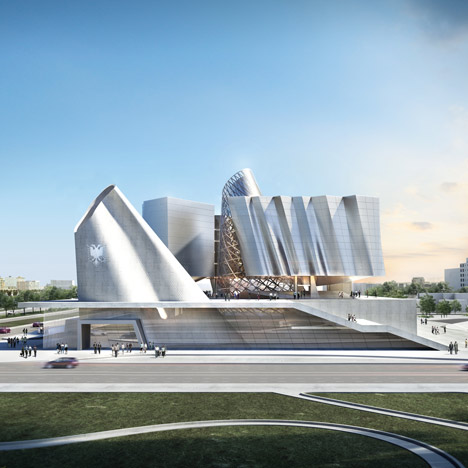