Nendo has designed a group of mini cheesecakes to look like trees within a snowy landscape for the Japanese confectionary company Flanders.

Contained inside a dessert box, the cheesecakes are topped with tree-shaped cocktail sticks and submerged within a snowy scene made from powdered sugar.

The wintry scene is intended to be representative of the island of Hokkaido, the northernmost of Japan's main islands, where Flanders is based.

When one of the tree-shaped cocktail sticks is pulled out, a piece of cheesecake emerges from beneath the blanket of powdered-sugar snow.

This concept was inspired by a tradition in north Japan where fruit and vegetables were stored in the snow in order to preserve them, and also to intensify the sweetness of the food.

The cheesecake was given the name Neyuki – a Japanese term meaning continuous snow cover – in tribute to Hokkaido's famously long-lasting winter.

Inspired by the area's high quality organic milk, fresh cream and cheese, Japanese patissier Yuichi Murakami decided to open a confectionary store, Flanders, in the city of Kushiro on Hokkaido.

Is it here that he also founded the sweet brand N, named after the word "north", and created the Neyuki cheesecakes.

In keeping with the sweet brand's minimal style, Nendo designed a simple packaging identity and logo for the new brand, comprised of just the letter N and a triangle above it that points in a northerly direction.

According to the studio, this arrow reflects the firm's expertise in making confectioneries using the ingredients of Hokkaido.

Supported by the crowdfunding platform *finan=sense, and with Nendo's design influence, Murakami created the Neyuki cheesecake as N's first product.

Flanders hopes to use the money raised through the crowdfunding, which reached a total of 3,500,000 yen (approximately £24,045), to release more confectionary products in the near future – a roll cake in the shape of a snowman has already been added to the collection.

This is not the first time Nendo have collaborated with companies to design confectionary products. The studio also created an ice cream cake for Häagen-Dazs, featuring a group of small chocolate houses, and created colourful chocolate bar packaging to look like paint swatches for a Belgian chocolatier. 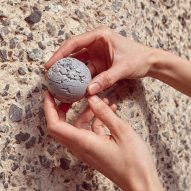