Architects and designers have imagined ways to transform the central reservation along New York's Park Avenue for an ideas competition, including an underground rock-climbing wall, a huge cascading waterfall and a route for kayaking commuters.

An aquarium, elevated walkways and a putting green are also among the schemes for Park Avenue's central reservation that architects, designers, urban planners, artists and students have submitted to the Beyond the Centerline ideas contest.

Organised by New York real-estate company Fisher Brothers, the competition tasked entrants to come up with innovative ways to transform the congested boulevard into a hive of activity.

From the 150 entrants, 17 were shortlisted for providing the most ambitious proposals – including three glass cubes to exhibit art work, an elevated basketball court and a yoga studio topped with an undulating grass roof.

Local Architects envisions a scheme that would create a narrow water passage accessed by curved steps, for New York residents to use for commuting by kayak, and an ice rink for skating or playing hockey.

A waterfall flows down the massive mountain-shaped structure that New York-based ATYPE Architecture proposes to slot along the avenue's central reservation, joining a number of schemes submitted by landscape designers that would bring more of the natural environment into the metropolis.

Brooklyn-based Harrison Green has rendered a forest offering a habitat for wildlife, while Terrain Work imagines building a plant-filled carnival using an image that mimics the cover of the New Yorker magazine.

A 30-foot-tall (nine-metre) field of stalks and a green wall also feature on the shortlist. While only ideas, Fisher Brothers hopes they could incite others to think about new ways to use the street.

"While Park Avenue, with its median plantings and periodic art installations, remains one of the world's most iconic commercial boulevards, I have long believed that we can and must be far more imaginative in how we encounter and utilise such a precious urban commodity," said Fisher Brothers partner Winston Fisher.

"Our hope is that this contest and these proposals will spark a real conversation about what can be done to activate Park Avenue's centreline for a new generation of New Yorkers." 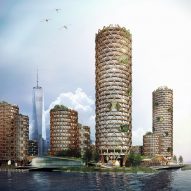 Top image is by AMLGM.