Atelier Vens Vanbelle has created a contemporary home behind the preserved facade of a former school in Ghent, featuring arched spaces that extend between the original windows and a new living room.

The building was originally constructed in 1908, but only the facade remained by the time its current owners asked the studio headed by Dries Vens and Maarten Vanbelle to create a home on the disused site.

Three previous owners had failed to find an appropriate use for the plot situated behind the heritage listed facade, which had to be preserved in its original state.

A key consideration was how to integrate the large arched windows facing onto the street into the design for a new-build private residence.

The windows are also raised above the street level, and the studio decided to enhance the connection between the interior and its surroundings by creating tube-like spaces aligned with these glazed surfaces.

"Contact with the street is very important, so it was decided to extrude the windows into spaces," the architects explained. "Everything is designed in relationship with the dimensions of the windows, and the gap between the windows."

The first of the openings forms the main entrance from the street. The second extruded space contains a kitchen, and the area culminating in the final window accommodates an office.

The deep walls between the carved spaces incorporate key functional features, such as appliances, worktops and storage in the kitchen, and a desk and shelving in the office.

A space between the entrance hallway and the kitchen conceals a toilet and a staircase that leads up to the first floor, and down to a partly submerged basement level providing additional storage and a laundry room.

The three arched spaces also align with niches incorporated into the new rear facade, which provide spaces for built-in storage and ledges for seating that overlook the garden beyond.

The main living area occupies the space between the two extruded white volumes and features a contrasting palette of raw, untreated materials that lend it a tactile and lived-in feel.

"Due to the choice of materials, the building appears to be spontaneous and lived through, while it actually is a completely new construction behind the facade," said the architects.

The brick walls, exposed steel beam and timber used for the floors and ceiling create a comfortable and neutral backdrop for the simple furnishings, while brown and white tiles in the entrance hall reference the building's former use.

The living space is slightly lower than the height of the kitchen and office due to the change in level from the street. High ceilings and the introduction of a double-height void ensure the rooms feels bright and spacious. 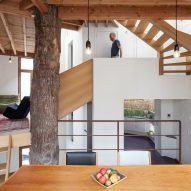 The garden at the rear of the building is also slightly lower than the floor of the living room. A shed covered in mirrored panels at the end of the turfed area helps to make this compact outdoor space feel larger.

The void at the centre of the building is topped with a skylight and lined with greenhouse profiles supporting panes of mirroring glass that reflect daylight down into the living areas.

The one-way glass ensures the rooms on the first floor maintain their privacy whilst enabling them to overlook the living space.

A landing that extends around the void provides access to a master bedroom and the three children's rooms on this level, as well as a bathroom with a separate wet room housing the bath and shower.

The studio previously used mirrored panels to clad an extension to a notary's office in the village of Horebeke, and incorporated an oak tree trunk into a pentagonal house in Ghent.