With Coventry set to be UK City of Culture in 2021, the destruction of the city's post-war architecture needs to stop, says Owen Hatherley.

Every now and then, I go to a city that had the hell bombed out of it in the second world war, and find that what it did afterwards to replan, rehouse and reimagine itself became the story it would tell to visitors.

Take Warsaw, which was rebuilt as an emulation of 18th century landscape paintings, but also Rotterdam, a hyperactively over-developed city where post-war precincts are preserved as a reminder of the planned social democratic city it once was. In Dresden and Minsk, grand boulevards and classical squares are tended right down to the 1950s neon signs. Also Le Havre, where Auguste Perret's reconstruction of the French port as a concrete metropolis, and the later additions to it by Oscar Niemeyer, far outnumber images of its 19th century remnants on postcards, magnets and books.

Of all of the great reconstruction projects of the first decade after 1945, there's only one city that never seems to take possession of and pride in what it did: Coventry.

It's puzzling, because post-war Coventry was a lot more fun than any of the cities mentioned above. And it was much more famous in its time, when the likes of Le Havre and Dresden were considered stiff and retrograde, and Rotterdam cold and technocratic.

Walk around the pedestrian precincts of the Midlands city and you will find a lot of obvious top-down scenographic planning. Everything is arranged around the vistas of the cathedral and church spires, with two later concrete high-rises added to provide new terminal points. But it's also very much a city of the Festival of Britain style, where modernism was tempered with nostalgic signage, decorative details, mosaic panels, and integral reliefs and sculpture. This sort of attention to the attractive and eccentric is usually popular. It has fallen by the wayside a little in the cult of brutalism – it isn't sexy or enigmatic and there'll never be a Phaidon book on it. But maybe fashions will change enough as time goes on that it'll be fashionable by, say, 2021.

That's the year that Coventry will be the UK City of Culture – an event which, whatever else may be said about it, has had some success in focusing attention on neglected cities in Britain that have an enormous amount going for them, artistically and architecturally. In Hull, for instance, there's the Edwardian city centre, where cash was lavished on rebuilding it as an imperial city of grandiose domes. 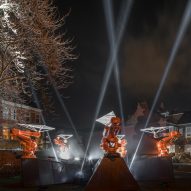 What Coventry has that can match up to that is the townscape of the two-level central precinct, the civic district around the old Lanchester Polytechnic, art gallery and town hall, the intriguing and original spaces of the Bull Yard and City Arcade, the International Style ensemble around the railway station, the Coventry swimming baths, the Belgrade Theatre, and of course, Basil Spence's thrilling, rampantly sentimental transformation of the cathedral into a poignant war memorial and showcase of modernist art.

Of these, only the latter is really safe. All the others – even those which include listed buildings – are under threat from property development, or in the case of the Belgrade Theatre, have already been degraded by being surrounded by 10th-rate new buildings.

A Twentieth Century Society report just published highlights the proposed changes. The least controversial may be the redesign of the central precinct, which entails removing the appallingly clumsy green 1990s escalator that barges into the square, blocking the view of the cathedral, and removing the neo-Victorian crazy paving inflicted on the square at the same time. The plans show the view being restored. But to offset that, the original fabric of the buildings that do survive, escalator aside, will be ripped out and refaced with a glass approximation of their grids. To my eyes, it looks less insulting and philistine than the 1990s version, but it's still some way from respecting the original idea.

Elsewhere, it's pure destruction. The listed railway station is to be surrounded with orange-clad tat of shamefully poor design, the listed William Mitchell reliefs at the Bull Yard are to be moved elsewhere and the rest demolished, the civic square to be mostly demolished and the incredible "elephant" leisure centre is to be erased completely. These are not the moves of a city that is proud of its architecture.

The main obstacle to the public appreciation of these buildings is simple – they're often dirty, covered in pigeon spikes and/or pigeon shit, neglected and worn. They're mostly well built and easily repaired and cleaned, and if what was done with the civic buildings of Hull was done here, their reputation would change with similar speed. There are already models here of new buildings that integrate and enhance the qualities of the post-war city, like Pringle Sharratt Richards's extension of the Herbert Gallery.

Another problem is the way that rules that are ruthlessly enforced on all other listed building types are often waived for modernist buildings – from Park Hill to Billingham Forum, listed works have been completely stripped out and redesigned, often invasively, because of a half-cocked idea that modern architecture is about structure rather than integrity.

Why not make being a City of Culture about pioneering a new civic culture for British cities?

But the real culprit in Coventry is something else – ownership. Aside from the Belgrade Theatre and the swimming baths, most of reconstructed Coventry, however much it conformed to a public plan, is just retail – something that set it apart from the more mixed-use approaches made in the 40s and 50s by Le Havre or Rotterdam. That means that it is effectively a giant mall, so it has to follow mall rules, which are, unfortunately, the sworn enemy of everything but the bottom line. The thing is, Coventry's economic decline since the 70s has meant that it desperately courts developers, out of the terror that if they don't invest, that decline will descend into full-scale freefall.

Maybe there's another way. Other ex-industrial towns – most famously, Preston – have given up on trying to chase John Lewis, and have started to try to do things in-house, attracting local co-operatives to fill the gaps left by all the failed boomtown schemes. That's where Coventry could be looking. Why should the central precinct be a mall? Why shouldn't it be a focus for real public activity, for co-housing and co-working spaces, much-needed new social housing, for galleries and social centres? Why not make being a City of Culture about pioneering a new civic culture for British cities, rather than waiting around for developers to save us?