High-tech architecture aligned with the revival of Victorian values in the 1980s, but did not end up producing the factories of a new period of British creativity, says Owen Hatherley.

The Englishness of high-tech architecture was often discussed in the 1980s. Not necessarily in the 1970s, when Richard Rogers' main opus was in Paris and co-designed with an Italian architect, and when the debt owed by Norman Foster to Buckminster Fuller was a lot more obvious, but in the subsequent decade, when there was something to prove.

It sounds strange now, given the literal decimation of British manufacturing since the 1980s, but a lot of the intellectual background to Thatcherism was predicated on reviving British industry and engineering.

For the right-wing intellectuals of the time, like Martin Wiener in his English Culture and the Design of the Industrial Spirit, post-war architecture, like the politics of the time, was all rather sentimental, what with those lavishly landscaped suburban universities in county towns.

In the end, the main high-tech contribution to industrial design was some see-thru vacuum cleaners made in Wiltshire

In theory, letting "lame ducks" die, taking on the trade unions and lifting restrictions would have meant an explosion of British creativity and derring-do. Foster or Nicholas Grimshaw would be our new Joseph Paxtons and Brunels, creating new forms and new consumer goods to rival the Japanese and the West Germans.

In the end, the main high-tech contribution to industrial design was some see-thru vacuum cleaners made in Wiltshire (before Dyson upped sticks to Asia). Looking at it today, especially in the context of the dreams and myths of Brexit, there does appear to have been something a bit Jeremy Clarkson about high-tech.

In the 1980s, the high-tech argument, irrespective of Rogers's own soft left politics, was part of an appeal to the "industrial spirit" that had apparently left us. In that, they were getting into an argument as old as modern architecture itself.

In Siegfried Giedion's 1928 Building in France, Building in Iron, Building in Ferroconcrete, a widely-read attempt to give modernism a "useable past", British engineers are dismissed. Yes, they got there first, with the first iron bridges and train sheds and iron-framed factories, but their unpoetic English empiricism meant that they didn't really explore the possibilities of the new materials, unlike the French. (On reading this book I freely admit to thinking "what about St Pancras and the Forth Rail Bridge, Siegfried").

In theory the high-tech architects should have spent the Thatcher era designing the new factories, bridges, power stations

Accordingly, British modernists were keen to prove otherwise, and by the '80s an entire cult had developed around Thomas Telford, William Barlow, and the daddy of them all, Isambard Kingdom Brunel, always represented by that photo where he stands in front of some giant iron chains, smoking a cigar.

This went along with the revival of "Victorian values" – while Labour and the trade unions looked at the 19th century through child labour, deportation, slums and disease, a counter-argument emerged that it was a great era of expansion and innovation. This idea became enshrined at the heart of government.

In theory, then, the high-tech architects should have spent the Thatcher era designing the new factories, bridges, power stations and suchlike that would power this new industrial expansion.

Of course they didn't, they designed the headquarters of an insurer, an arts centre in one of those county town universities, a supermarket, some luxury flats – and eventually, an airport. One reason for this is the popularity among conservatives (and not only them) of another aesthetic, Postmodernism, which in its British version tended to meld with a desire to reject everything about the 20th century altogether.

But it's also because this was a period of industrial contraction. The point with capitalism has never been to make things, it has been to make money – and in Britain since the 1970s, it has been much more profitable to make it from land and rents.

So instead, there has been a shift in the sort of Englishness that high-tech came to specialise in. However Clarkson-like some of the high-tech rhetoric was – faster speeds! Longer spans! Higher girders! – and however much Foster's public persona became Bond villain-like, all the big firms ended up having to make "contextual" architecture as much as anyone else.

Of course there were still inspired abstract objects like Grimshaw's Eden Project or Eurostar terminal, which came closer to the atmosphere of the great train sheds than anything else built in the last hundred years, without borrowing or copying.

But these were joined by the likes of Porticullis House, an attempt by Hopkins to build a Victorian office block without making it too obvious; Foster's Great Court at the British Museum, an iron and glass rotunda to frame a Grecian library; and most recently and disappointingly, and again at the British Museum, a Rogers Stirk Harbour extension of terrible dullness.

One reason why these are so often the weakest high-tech buildings is that these architects had never shown much interest in the urban or the "civic" before – that was left for the anxious theorists, with their Aldo Rossi books. Their greatest moments, like Lloyd's or the Pompidou, create their own environments, and force the city to revolve around them.

High-tech architects showed little affinity for urban complexity or grain, so it's unsurprising that they've tended instead towards either the business park, or the theme park.

The worst of these, combining both high-tech gone civic and Clarksonian arrogance was Grimshaw's Cutty Sark project, where the late Victorian ship, previously in a dry dock where anyone could see it, was newly encased in a pay-to-enter value-engineered glass enclosure and pointlessly suspended so that you could walk under it.

This is where all that "industrial spirit" talk ended up – not in designing new ships as part of a shipbuilding industry, that was done cheaper in South Korea. Instead, you could hoist up an old one as part of a tourist spectacle. 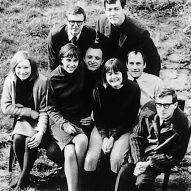 "High-tech was a supreme toys-for-the-boys moment"

A lot of those dreams have come back in the last few years. A huge amount of the appeal of Brexit rests on the idea that "we" once ruled the waves and bestrode the world with our engineering expertise, and therefore ought to again.

The notion that the thing that stopped "us" from doing that was trade unions is hard to take seriously, 40 years later. Instead, we're told that what was stopping us was the European Union, and its regulations. Take them away, and it's full steam ahead to Singapore! (where of course 80 per cent of people live in council housing, but that's another story.)

Anything to avoid actually looking at what British capitalism actually is, and at who it benefits. As part of that desperate avoidance, high-tech now looks very much like another part of the process that brought us here, another post-imperial delusion.

Photography is by Norman Foster.