The block colours and black outlines of these rugs by Spanish designer Patricia Urquiola create a false sense of depth by tricking the eye.

Titled Rotazioni and Visioni, the two rug sets appear three-dimensional thanks to their geometric patterning.

For Rotazioni, meaning rotations from Italian, a set of cylindrical shapes are overlaid to form large square and rectangular compositions with rounded corners.

Each tube-like portion is coloured differently, from slate blue to lavender and pale rust, and patterned with a gradient to appear round.

"Rotazioni plays on the repetition of overlapping cylindrical forms that emphasise the circle as the matrix of the design," said Italian company CC-Tapis, which produces the rugs.

"A scale of pastel colours and chromatic contrasts insinuate the gradient on the surface of the cylinders, creating a three-dimensional effect." 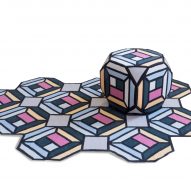 Front designs modular rugs that can be folded up into furniture

The Visioni designs feature rectangles, parallelograms and other shapes that produce a similar 3D effect, created with the simple technique used for drawing a cube on paper.

One version is coloured with grey, taupe, cream and mustard tones, while another has more colourful elements of rust, mustard, dusty pink, a blue-white, yellow and caramel.

Urquiola first presented the Visioni rug in 2016, but the carpet was reintroduced in new colours last year.

Like all of Cc-Tapis' contemporary rugs, the designs are hand-knotted in Nepal. Urquiola's are made of Himalayan wool and silk, and densely packed with approximately 125,000 knots per square metre.

"People that work in a less industrial way, people that have a more artisanal way of thinking, they are never scared to take risks," said the designer, referring to the brand.

Based in Milan, Urquiola works across several design disciplines and was recently the subject of an exhibition at the Philadelphia Museum of Art. She was placed at number 87 in the 2017 Dezeen Hot List of the world's most newsworthy forces in design.

Her interior projects include the northern Italy headquarters for furniture brand Cassina – where she serves as creative director – a showroom for Swiss bathroom brand Laufen, and a hotel in Milan filled with colourful custom furniture.