Grimshaw Architects has completed the latest station for the expanded Toronto subway system, with a huge curved roof that swoops down to form walls and is covered in mirrors underneath.

Designed by global firm Grimshaw, in collaboration with consultants Arup and architect of record Adamson Associates, VMC has an elliptical ground plan.

Its shell-like roof curves down to the ground on the long sides, while glass windows fill the gaps at each end – where the entrances are found.

The concave surface is lined with thousands of square-shaped mirrored panels that redirect both natural and artificial light around the space, and to the platforms below.

"We wanted to bring daylight down into the box for wayfinding and passenger experience," said Juan Porral, a partner at Grimshaw.

An X-shaped bridge at street level allows glimpses down into the platform, and connects the building's four corners.

Safety was also a key concern. The station has clear sight lines, with walking routes to stairs and gates easily visible. They are clearly mapped to eliminate bottlenecks during rush-hour commuting.

"Beyond convenience and ease of use, the geometry and transparency create a safer, more secure transit environment," said a statement from Grimshaw.

The Toronto York-Spadina Subway Extension of Line 1, created to provide commuter access from the city suburb of Vaughan to Downtown Toronto and beyond. 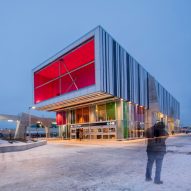 Development is also expected along the line, and around VCM, spaces have been earmarked for future retail projects.

The station's adaptable features include panels around the perimeter that can be knocked down, to open up the building at different locations and connect it to others in future.

"Grimshaw was challenged to imagine a new city around the station and create an iconic head house that would become a focal point and organising element," said the firm's statement.

Grimshaw was founded by architect Nicholas Grimshaw in London in 1980, and has since opened offices around the world.

Other recent projects by the firm include an ecological park in China with a massive indoor water fountain, an office tower with three interlinking sections in Sydney, and a glass-encased student centre for Duke University in North Carolina.

Photography by is Shai Gil.