Brussels' €125 million (£109 million) Centre Pompidou is to be designed by noAarchitecten, EM2N and Sergison Bates architects.

The international team's proposal, called 'A Stage for Brussels', won a competition against 92 other entries to reshape a former Citroën factory into the KANAL - Centre Pompidou. Swiss architect Roger Diener led the jury.

As a cultural hub for Belgium, KANAL - Centre Pompidou will be home to a Museum of Modern and Contemporary Art and architecture centre the CIVA Foundation, as well as a series of public art spaces.

Last year the Parisian gallery announced it would also be opening a Shanghai outpost, located in the David Chipperfield-design West Bund Art Museum.

Brussels-based noAarchitecten, EM2N from Zurich, and the London office of Sergison Bates architects collaborated on their plan to strip out the 1930s industrial building and insert three volumes for the museum.

"Rather than a spectacular gesture, our proposal offers an attitude of Radical Optimism: critical, receptive, dedicated, precise," the architecture team said in their statement.

"We want to radically engage with and trust what is there."

With it's wrap-around glazing the old car showroom will become a "display window" for the centre.

Next door, a electronic display will wrap around the top of the former Citroën workshop, to display information or be integrated into art projects. An old office block is to be demolished to make room for an extension.

Inside, the glass-roofed workshop will be stripped out and three "boxes within boxes" built to house the art museum, architecture centre and a 400-seat auditorium.

An indoor "street" will traverse the ground floor of the 35,000 square metre site. Ramps and bridges connecting the four original levels of varying heights will be retained and used as additional art display and installation sites.

The use of new materials in the conversion of the factory to art gallery has been limited as part of a drive towards sustainability.

Rather than heat and cool the vast factory spaces and the galleries as one, the boxes will have their own localised controllable climates. Energy saving apparatus will be retrofitted to use the rooftop, ground and canal for sustainable heating and cooling.

"This rich and layered project for KANAL is really a building for Brussels, a city where the future European urbanity is emerging in all its complexity. The Brussels urban landscape is now richer of a Brussel’s building," said Kristiaan Borret, chief architect of the Brussels-Capital Region.

For the 13 months before the work starts a programme of art and architecture exhibitions will be held, allowing the public to experience the site in its "raw state". 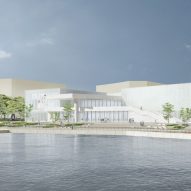 In the United States, American architecture firm Bruner/Cott has turned a former textile factory into the Massachusetts Museum of Contemporary Art. In New York, the former Domino Sugar Factory is being turned into a public park by landscape architecture firm James Corner Field Operations.