Quadri is situated on the northern end of Venice's Piazza San Marco, set behind the arched openings of the square's arcade. The cafe, which has been open since 1775, is now owned by the Alajmo family.

After noticing the restaurant had fallen into a state of disrepair, brothers Massimiliano and Raffaele Alajmo approached French designer Philippe Starck to "bring back the original splendour of the space in a contemporary context".

The pair had first met the designer a decade ago and already worked together on the creation of two other opulent dining spaces in Venice and Paris. Starck has also recently been charged with designing the interiors for Jean Nouvel's luxury plant-covered hotel in Sāo Paulo.

"Quadri was extraordinary, except it was a little sleepy. Out of respect, love and intelligence, we didn't want to change such a powerful concentration of mystery, beauty, oddity and poetry," said Starck.

A key challenge of the project was considering how to prepare the restaurant's interiors for acqua alta, a natural phenomena where high tides in the Adriatic Sea cause the temporary flooding of several areas of Venice.

Rather than finding a way to conceal potential water damage, Starck instead decided to craft all table legs and other floor fixtures from unvarnished brass, intended to naturally oxidise and change colour over time.

Half of the brass lettering above the restaurant's entrance has been left gold, while the other has been oxidised to reflect the typical affects of the flooding.

For the pastel-hued café and bistro on Quadri's ground floor, Starck called on the help of local art restorers Anna de Spirt and Adriana Spagnol to strip back any existing paint and expose the 19th-century stucco underneath. 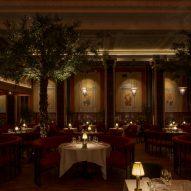 The fabric – which is based on a pattern from the 1550s – has been updated to feature portraits of the Alajmo brothers, as well as space-themed imagery like satellites and astronauts.

Decoration is provided by a restored 1930s chandelier made from Murano glass, large oval-shaped mirrors that have been lined with vintage photographs and taxidermied animals.

Photography is by Marie-Pierre Morel.