Architecture firm HKS has overhauled a 120-year-old steam plant and a brutalist office building, creating a headquarters for a medical company and aiming to revive an ageing downtown district in the American Rust Belt.

The ProMedica Headquarters is located in the heart of downtown Toledo, a city in northwest Ohio. The project involved the adaptive reuse and expansion of a landmarked steam plant built in 1896, and designed by famed architect Daniel Burnham – known for his tall buildings, urban masterplans, and his role as chief architect of the 1893 Chicago World’s Fair.

The project also entailed the overhaul of a brutalist concrete building dating to 1981 and the construction of a new parking garage. The campus is adjacent to a recently updated park that runs alongside the Maumee River.

"In a very dramatic and intentional way, the new ProMedica Headquarters campus, through materiality, articulation, and dynamic public and landscaped spaces, integrates both existing and new buildings of varied architectural character, programmatic function and historical relevance," said HKS, a US-based firm with offices around the globe. "The campus represents an architectural timeline of the development of the Toledo waterfront."

ProMedica, a nonprofit healthcare company, formerly had offices scattered around the city and sought to unite its employees under one roof. Deciding to situate its headquarters in the downtown district was a bold move. Like many American cities, Toledo's urban core was emptied out over the past few decades as residents and businesses migrated to the suburbs.

"Similar to other Rust Belt cities, when manufacturing plants and corporations relocated away from downtown, the city suffered," said HKS.

The new downtown campus is intended to heighten the company's visibility while demonstrating its commitment to the local economy.

"ProMedica's move represents the largest influx of jobs into downtown Toledo in decades," the team said. "Building on this, HKS adapted a design approach that would demonstrate ProMedica's commitment to Toledo's community health and connect the company in a more transparent way to its city by celebrating the site's heritage and history."

Listed on the National Register of Historic Places, the steam plant sat vacant for three decades before it was bought by ProMedica. The 78,465-square-foot (7,290-square-metre) building has red brick walls and two tall steam stacks, which were preserved. The interior was converted into a four-storey office building with ample communal areas and a light-filled atrium.

On the side of the building facing the river, the team added a three-storey, rectangular volume totalling 45,535 square feet (4,230 square metres). Its facades consist of glass and terracotta.

"As Burnham made a masterful use of the materials and methods of his time, the expanded Steam Plant complex spans the classical and contemporary in a cohesive and complimentary way," the architects said. 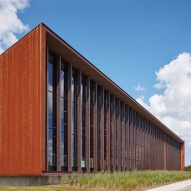 Original elements in the steam plant were preserved when possible, including steel roof trusses and a 13-tonne bridge crane, which now hangs in the atrium. Inside the addition, the team used a minimal palette of materials in order to keep the focus on views and to honour Burnham's vision.

"In keeping with Daniel Burnham's use of light, volume, and architecture's connection to and need of open space and landscapes, the expansion creates a dramatic 'window' towards the Maumee and Promenade Park without overpowering the existing structure," HKS said.

The brutalist structure, called the Junction Building, originally served as headquarters for the Toledo Trust Company. It was later occupied by KeyBank, which moved out in 2015.

With public transportation options limited in Toledo, HKS needed to create a parking area for ProMedica employees. It conceived a six-level building with 760 parking spaces and ground-level retail. Exterior walls are clad in a mixture of metal panels and fins, and a large screen on the north engages with the riverfront park.

"To find a way to create many uses for the dedicated parking structure, designers envisioned the north facade of the garage as a giant projection screen, where public movie showings or concerts underway in Promenade Park could be displayed," the architects said.

"HKS' design for ProMedica Headquarters transforms downtown Toledo, welcoming employees and the community to the riverfront, drawn by a design that celebrates its site and city."

HKS is among the top firms in the US based on revenue, ranking number 6 on Architectural Record's 2017 list. Its other recently completed projects include a new stadium for the Minnesota Vikings, which features angular protrusions, zinc cladding and a roof partly made of plastic film.

Photography is by Tom Harris. 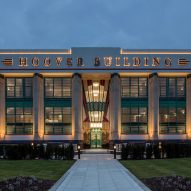