A pale plywood interior is hidden behind the slatted black timber walls of this house in Chile, which occupies a rural site with views towards one of the country's most active volcanoes.

Ampuero Yutronic completed the residence in Chile's Araucania Region – an area known for its dramatic terrain of volcanoes, lakes and the Andes mountains to the east – near a town called Pucon.

Casa Hualle is covered in timber slats that are stained to resemble the colour of the dark volcanic stone commonly used to clad houses in the town and surrounding rural area.

It follows a string of black houses that have recently been completed in Chile, including a long residence by Architect Alejandro Soffia near Santiago and a rural house by architecture firm 2DM.

The wooden boards are slender and set over a black waterproof covering, which the studio describes as an "ephemeral" quality in comparison to its traditional counterparts.

"This dark grey tone it something you see in some traditional rural buildings of the area and in Pucon town," studio co-founder Javier Ampuero Ernst told Dezeen. "It is also the tone of the volcanic stone, which is very present everywhere you go."

"In the end, the dark exterior helped to highlight the beauty of the surrounding by contrast," he added.

From some angles, the shape of the two-storey house resembles one of the pitched-roof sheds scattered around the area. But the studio has manipulated this form, angling the southern-facing wall to face the active Villarrica volcano visible in the south. 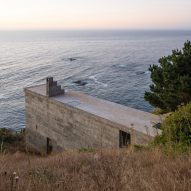 Other adaptations aim to offer protection from strong winds and sunshine in the area. A chunk is taken out of the corner of the building to create a sheltered doorway, oriented away from the prevailing northeasterly wind and rain. Another recess in the facade shades a large window from strong sunlight.

The roof above is faceted so that it runs flat on the northern side and then reaches a peak in the southwest corner, covering the main entrance.

Concrete forms steps up to the doorway and then wraps around the house to create a pathway to the rear. Here, a long and narrow swimming pool extends perpendicularly from the house, aligning with the volcano to the south and Villarrica lake in the north.

Ampuero Yutronic – which is based in London and Santiago – chose contrasting pale plywood to line the walls and form the staircase banister inside the house. Concrete comprising black volcanic sand and aggregate covers the floor throughout, creating a pared-back interior that the team likens to a gallery.

The use of concrete also adds to the thermal mass of the building, regulating the internal temperature, as part of the environmental strategy.

Wood-framed openings of varying sizes are placed to maximise on solar gain and frame key viewpoints from the interior. A large window captures the peak of the volcano from the main living area.

"The pale of the interior helped to highlight the windows frame which captured the views," said Ampuero Ernst. "These carefully composed views of the outside take on a significance, similar to paintings on the inside walls of the house."

A double-height, open-plan kitchen, dining and living space is located on the ground floor of the house. It includes a wood-burning stove, which provides the main source of heating.

In the kitchen, storage is built into the plywood walls behind a central island featuring a black base. A black pendant light hangs above the centre of the space, which is furnished simply with a wooden table, benches and stools.

Also on this level are a pair of guest rooms and bathrooms placed on either side of the central area.

The plywood staircase lands in the studio and library on the first floor. A gallery walkway leads from here to the master bedroom on the other side. Minimal decoration continues in the bedroom – the main feature is a seat built into the wall beneath the window.

The bed is mounted on a red-toned wooden frame with matching bedside tables placed either side and is set against a plywood wall screen that hides the bathroom behind. A pair of sinks are raised on wooden stand in the washroom, while the tub is slightly elevated on a concrete platform.

Photography is by Felipe Fontecilla.