The studio buildings are located on the campus of the I-Park Foundation, an organisation that offers a renowned artist-in-residence programme. The campus covers 450 bucolic acres (182 hectares) just outside of East Haddam, Connecticut.

While conceiving the structures, the architects took cues from regional design traditions and merged them with a contemporary aesthetic.

"The design is driven by I­-Park's intention to provide an exceptionally private work environment for visiting artists, free from distraction, while also connecting them to the surrounding natural environment and the community of creative residents," the firm said.

Each studio, where artists spend up to four weeks working on projects of their choosing, is approximately 1,000 square feet (93 square metres). Rather than creating simple boxes, the architects angled one side of each building, and topped them both with asymmetrical pitched roofs. The result is a sculptural form intended to convey a "dynamic sense of interaction".

Facades are wrapped in dark-stained cedar, while galvanised metal was used for the roofs. Both studios have large, north-facing window walls that usher in natural light while affording views of the picturesque landscape. Sheltered porches offers a place for artists to take in their peaceful surroundings.

"A 'front porch' incorporated into each studio accesses a network of pathways through the woods and serves as a flexible indoor/outdoor space for the artist to use as they like," Fiedler Marciano said.

The interiors are meant to feel bright, warm and fluid. Each studio has a large room and a small enclosed workspace, with exposed wooden ceilings and concrete flooring. To support mounted artwork, continuous plywood blocking was installed behind the painted sheetrock walls – a strategy often used in galleries. 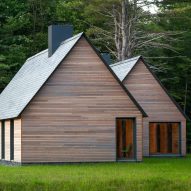 "This provides artists with the ability to attach or hang things anywhere on the wall's surface, as opposed to having to find a stud to attach to," the architects said.

Fiedler Marciano Architecture has also developed an overall masterplan for the property, which envisions additional studios, a performing arts venue, workshop space, and a residence hall.

Fiedler did a two-week residency at I­-Park in April 2016, giving him an in-depth understanding of the campus from a resident's perspective.

"It was a surprisingly intense and wonderfully fruitful way to get to know and appreciate the physical surroundings, and even more importantly the residency culture that makes I-­Park such a special place for both artists and art," he said.

New England and neighbouring New York state are a popular regions for artist studios and retreats. Others in the area include a bright red gabled building in Connecticut, a pair of his-and-hers volumes in the Hamptons and a barn-like structure in Upstate New York.

Photography is by Chris Cooper.