This £39,000 prefabricated cabin by artist Bobby Niven and architect Iain MacLeod is designed to be easily transported on the back of a lorry.

School friends Niven and MacLeod designed the small hut, known as the Artist Bothy after the Scottish name for a shelter, for artists wanting to set up studio in isolated locations.

The compact 12.25-square-metre cabin has a footprint of just 5.5 by 3 metres. Its gabled cross-laminated timber structure is covered in sheets of russet Corten steel and Scottish larch, while a small patio wraps the corner by the entrance.

Double glazing, wood-fibre insulation and a wood-burning stove mean the cabin can operate off-grid, if plugging into the mains isn't an option.

The cabin's design takes advantage of new legislation in Scotland that exempts simple hut structures from many building regulations.

"The Artist Bothy was a dream brief, to create a flexible space that could feel connected to nature in a rural environment yet also look at home in a more urban context," said MacLeod.

"The result is a paired down vernacular form that although appears very simple is full of considered decisions to make this a unique and very functional space," he explained.

"It has also been built to dimensions designed to ease the statutory permission process for prospective owners."

The Artist Bothy is a continuation of the Bothy Project, which Niven and MacLeod began in the Scottish Highlands back in 2011 to offer artists' residency space in the rugged, mountainous terrain that dominates the northwest of the country. 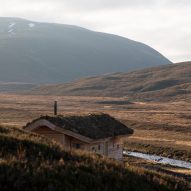 The pair installed their first cabin in a wooded area of the Cairngorms National Park, offering residency opportunities to artists looking for an isolated workspace where they could get up close to nature.

A second is installed on the Isle of Eigg off Scotland's west coast, and a third – sheathed in corrugated plastic – followed in 2014.

This bothy, currently set up in the grounds of the Scottish National Gallery of Modern Art in Edinburgh, provided an artist residency space, and continues to host events.

Inside, a mezzanine accessed by a broad ladder offers a wood-lined sleeping space above the kitchen and dining area. The wood-burner and hearth define a lounge at the other end of the floorplan.

"The success of Bothy Project showed us how much artists benefited from residencies and access to nature in our bothies, and the continuous demand for holiday stays confirmed that everyone, not just artists, benefited from time in these special spaces," said Niven.

"As a result Iain and I sat down to look at how we could improve on the original Inshriach Bothy design and create a prefabricated Bothy, removing the headache of a complex build and install, and taking the ethos of simplicity and functionality even further."

Sales of the Artist Bothy, a prototype of which is on show at the Edinburgh Sculpture Workshop, will fund residency spaces provided through the Bothy Project.